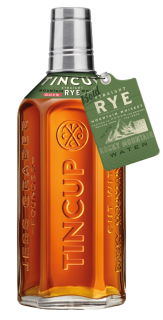 DENVER, Colorado – TINCUP, the Mountain Whiskey, is proud to introduce TINCUP Rye, a bold and smooth straight rye whiskey inspired by the daring settlers of the American west and the partners with whom they clinked their cups. In celebration of the launch, the brand is putting a spotlight on notable adventure duos through the release of its new “Partner In Adventure” campaign, which brings to life true stories of adventure and the powerful bonds forged when people come together in its pursuit. TINCUP is encouraging consumers and their partners in adventure to share their stories for the chance to win an adventure exploring the Rocky Mountains and the rugged town of Tin Cup, Colorado.

TINCUP Rye is a straight rye whiskey, distilled and aged for three years before being cut to proof with Rocky Mountain water. It has been crafted to honor the original rye recipes that were enjoyed by settlers and miners in Gunnison County. The brand takes its name and inspiration from Tin Cup – a mining town founded there in 1879 on the Western slope of Colorado, in the adjacent valley to where Jess Graber, founder of TINCUP Whiskey, first began distilling. Following a day within the depths of the mines, the resident workers of Tin Cup would often watch the sun go down with rye whiskey in hand.

“TINCUP Rye is a salute to American whiskey tradition,” said Graber. “In the early days before prohibition, rye was the predominant spirit available and the drink of choice for Colorado’s mining pioneers. Our newest whiskey is a toast to those bold individuals and their partners in adventure and exploration.”

Two notable characters in Tin Cup’s early history include the town’s last mayor, Alex Parent, and the larger than life bootlegger, Uley Scheer. For nearly 30 years, the duo braved treacherous mountain passes in the heart of winter and beyond to get their supplies. Inspired by Parent and Scheer’s partnership, TINCUP is highlighting the stories of modern adventure pairs, including climber and filmmaker couple Renan Ozturk and Taylor Rees, and offering an opportunity for inspired storytellers to join them on the brand’s own adventure in the town of Tin Cup this August.

“Since our 24-hour first date climbing in Grand Teton, we have shared some incredible adventures that shaped who we are,” said Ozturk and Rees. “Our partners help us to explore new terrain, expand our horizons and push our limits. While the stories told of adventure are powerful, it is the experiences we share and the bonds we create that are the most meaningful. We’re excited to partner with TINCUP Rye to celebrate these stories and relive some of the early adventures of Tin Cup.”

TINCUP Rye Whiskey is bottled at 45% ABV and will be available nationwide for a suggested retail price of $29.99 for a 750ml bottle and online at http://www.reservebar.com.

PALATE Smooth, bold and even spice

TINCUP® is a classic American whiskey with a bourbon-style profile. Created by Jess Graber, who began distilling almost 40 years ago, TINCUP® is made using a blend of mid-western rye, corn and malted barley. The whiskey is aged in American white oak barrels and cut with pure Rocky Mountain spring water. TINCUP® Mountain Whiskey takes its name from Tin Cup, CO, an old mining town set on the western slope of Colorado. It is named for the tin cups the resident mine workers drank their whiskey from following a day down in the depths of the Rocky Mountains. TINCUP® celebrates these mining pioneers and the rugged spirit of the American West. TINCUP® Whiskey is bottled at 42% ABV, and is available nationally with a suggested retail price of $28 for a 750ml bottle. Find your Mountain at www.tincupwhiskey.com.