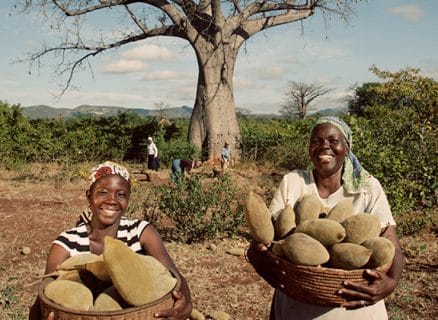 Baobab Fruit Powder, often called “the African Superfruit”, earns its place in the superfood category due to its extraordinary nutritional profile. In its pure form, the powder is sold in health food stores across Europe, North America and Australasia alongside similar products such as Spirulina. Moringa and Acai. As an ingredient, Baobab’s versatility means it is readily incorporated into a wide range of products from smoothies, health bars, breakfast cereals, beverages, ice creams and yoghurts through to baked goods, chocolates and confectionery.

Preferred by formulators and consumers for its rich mineral, vitamin, electrolyte and antioxidant profile, Baobab powder is also an exceptional source of prebiotic dietary fiber, with a long history of traditional use in the prevention and management of diabetes. The fruit has a subtle, lemon sherbet-like flavour, which combines readily with other flavours, allowing for its use in both sweet and savory applications. As a result it is being increasingly adopted by food and beverage brands looking to capitalise on Baobab’s growing reputation as a natural and functional alternative to processed food ingredients.

Ready-to-Use Baobab Paste is a pasteurized, aseptically-packed product with a purée-like consistency that contains nothing other than pure Baobab Fruit Powder and water. It has been specifically formulated for multiple product applications, including beverages, yogurts, pastry and confectionery fillings, dessert toppings, breakfast cereals, smoothie bowls, ice creams and sports gels.

Organic Red Baobab Tea is unusual in that it is produced from the internal funicles (fibers) of the Baobab Fruit. The funicles are carefully removed from the fruit pods by hand before being mechanically processed into a tea cut. Boasting a high antioxidant capacity equal to that of green tea, Red Baobab Tea infuses easily with a warm golden-red colour and a distinctive light tangy citrus flavour. It is 100% natural, raw, non-GMO and free of preservatives.

“As far as we know, our Ready-to-Use Baobab Paste and Red Baobab Tea are both completely unique to the industry. We formulated our Baobab Paste as a result of the increasingly stringent demands for food safety from large-scale companies. The Paste is pasteurized and aseptically packed by our manufacturing partner in South Africa, and we adhere to all required GMP’s during the process”, says Gus Le Breton, Co-Founder of EcoProducts B’Ayoba. “We had been searching for the right application for the funicles of the fruit for a couple of years, and after exhaustive testing we realized that it works perfectly as a tea when processed in the right way. We have been very excited to see the reaction from the food and beverage industries to both these products”.

With its swollen, bottle-shaped trunk and root-like branches, the Baobab Tree is an icon of the African savannah that can live up to 2500 years old. Baobabs are almost unique in that their fruit occurs naturally as a dry powder – the fruit pods dehydrating and hardening on the branch throughout the dry season. It is thought that this process of dehydration naturally concentrates the nutrients in the pods, producing one of the most nutrient-dense fruits on the planet.

A joint venture between two leading Baobab Fruit producers, EcoProducts B’Ayoba is Africa’s only FairWild and FSSC 22000 Version 4.1 certified Baobab operation. They have impeccable social-impact credentials, providing a much needed supplemental income to over 5,000 registered rural African harvesters and their families. Their supply chains are fully sustainable with environmental and training programs in place to protect the Baobab tree populations. They are a member of the Union for Ethical Biotrade.