Big Swig is a product of Austin Speciality, which is an Austin, Texas based craft beer, wine, and beverage distributor. The product, which was announced in November 2017, comes in three zero-calorie / zero-sugar flavors: Original, Ruby Red Grapefruit, and Key Lime. 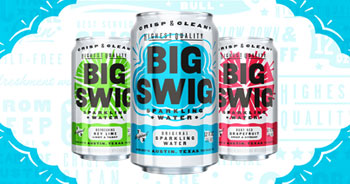 The products are packaged in 12 oz. cans that feature a design and branding that we’d best sum up with one word: loud. This starts with the brand name itself, which, displayed in all capital letters, feels like it’s shouting “BIG SWIG” right at you. From there, the front of the can is jammed with text, ranging from product descriptors such as “crisp & clean!” and “highest quality” to other elements that are selling you on the product’s roots in Austin.

What feels slightly lost in the shuffle are callouts for the product’s key attributes. Specifically, its flavor and zero calorie and zero sugar aspects. The flavor name is one of the smallest text elements on the can, while there’s no mention of the calorie content (or lack thereof) on the front of the package. However, they have given each of the three flavors an accent color, with green for Key Lime, blue for Original, and red for Ruby Red Grapefruit. So, while we don’t think it’s good that you’ll have to examine the can somewhat closely the first time, they’ve at least given a  visual indicator to make it easier the second time around.

As for what’s inside the can, they’ve certainly created something that’s crisp and clean. There’s really not a whole lot else to say about the Original, which is unflavored, but the other two are definitely enjoyable offerings. The statement “highest quality” doesn’t really hold true for us as there are definitely better tasting offerings out there. Regardless, we don’t think that Big Swig is really after being the best tasting or highest quality offering out there.

Instead, Big Swig seems to have positioned itself as a LaCroix competitor of sorts. But while the branding of LaCroix is softer, while still distinctive and stylized, Big Swig is loud and in-your-face. It’s hard to say what kind of opportunity is out there for a sparkling water brand that’s going to skew younger and probably more towards male consumers, but that’s really where we see this brand fitting.

Regardless, we do think there’s some work to do with the flavors. Specifically, we think they need more than three to effectively compete in a space where a large number of SKUs is  expected.

Overall, Big Swig is an interesting and opportunistic product that definitely offers the sparkling water category something unique. But whether this uniqueness is enough to compete is really hard to tell.