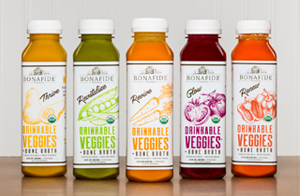 With this new product offering, Bonafide Provisions seems to be trying to marry the two. Drinkable Veggies Bone Broth, which is USDA Organic certified, contains chicken broth at the base of each savory flavor. From there, they’ve added vegetables, salt, spices, and vinegar (apple cider vinegar and white vinegar) to create each individual formulation. We’d describe the flavors as more savory and flavorful than either bone broth or drinkable soup.

For this review, we sampled five flavors: Glow (tomato, beet, cucumber), Revive (carrot, fennel, turmeric), Thrive (squash, onion, turmeric), Renew (red pepper and tomato), and Revitalize (peas, asparagus, spinach, lemon, and mint). Hearing just the names, you definitely won’t have a sense of what the actual flavors are. One note about tasting these savory products: we found them to be much more enjoyable as they approached room temperature. The experience just isn’t the same when they are chilled.

Our favorites of the bunch were Thrive, which has an incredible umami flavor, Revive, which has a bright carrot flavor, and Revitalize, which is loaded with fresh pea flavor. But even the other two, Glow and Renew, are quite tasty, although we feel as though they could use a bit more “pop.”

Taking a look at the outside, Bonafide Provisions has created something that looks and feels like a super premium product. Using cleanly executed illustrated graphics, the product has visual appeal thanks to the clean arrangement on the label and its use of a single accent color for each product.

While it definitely has some visual appeal, we feel as though the messaging that the product uses needs some work. First and foremost, the juxtaposition of placing “drinkable veggies” on top of “bone broth” in different fonts isn’t the most intuitive way to communicate what the product is. When we first saw it, we were immediately wondering if this was a “veggie bone broth” or simply a vegetable drink. Remedying this would be a huge help. Second, the use of functional words, such as “Renew” or “Thrive” seems meaningless in the context of bone broth or drinkable soup. We feel as though this space could be better used for some sort of flavor name that helps the consumer understand what’s inside the bottle.

Overall, Bonafide Provisions has created some really nice innovation with this product line. The nexus of drinkable soup and bone broth is something that works quite well and, after seeing and tasting what they’ve created, feels like it might have larger potential than either concept does by itself.