Califia Farms Nitro Cold Brew is, like the rest of the Califia Farms line, a dairy free offering that is, at least as far as we know, the first nitro cold brew offering to incorporate almond milk (and macadamia milk). 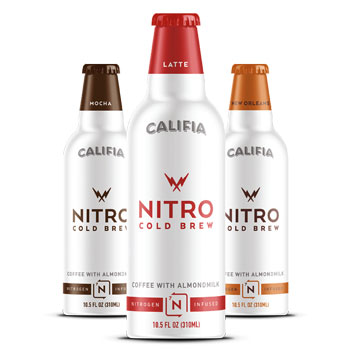 Now, there are a rather staggering number of cold brew products out there -- to the point where it seems as though we’re receiving three or four new ones a week -- so it’s becoming more and more important for new entries to have something unique if they want to have any chance of making it. For Califia Farms, the key difference is mainly the almond milk based formulation, but it also comes in the form of the packaging, which is a 10.5 oz. aluminum bottle. At least for right now, this is something that makes the product stand out as there’s only one other coffee using this package (Black Medicine).

The line currently has three flavors: Latte, New Orleans, and Mocha. All three of these have a pleasant nitro-enhanced texture, although that means they’re best served in a glass rather than straight from the bottle. The nitro enhancement really seems to work well with the nut milk, perhaps even better than the dairy-based nitro products that are starting to pop up. Other similarities across the line are the use of sugar (Latte - 10g, New Orleans - 11g, and Mocha - 18g), sea salt, natural flavors, and different ingredients to stabilize the blends (sunflower lecithin, locust bean gum, gellan gum).

As for the individual flavors, the first two (Latte and New Orleans) are essentially unflavored, with the key difference between Latte and New Orleans the use of chicory in the latter formulation. In both of these flavors there is a pretty strong almond milk flavor, which, although pleasant, almost begs for a bit more coffee. Even with the chicory, the differences between the two are definitely nuanced, with there being slightly less edge to the New Orleans variety.

The third flavor, Mocha, shines in the way that they’ve used the chocolate flavor rather sparingly. Typically, mocha flavored ready to drink coffee has an almost overbearing chocolate flavor; that’s far from the case here. There’s a nice balance between the cold-brew, the nut milk, and the mocha flavor, which makes for an extremely enjoyable flavor profile.

The packaging is slightly different than what you’ll find on other Califia products, starting with the lack of the icon (the one that features a female face) and the word “Farms.” Perhaps this is their effort to make the product look a bit more coffeehouse-like, which is fine. Instead, the eye goes immediately to the words “NITRO” and “COLD BREW.” We’re honestly torn on whether or not they should have consistency with the brand or not -- but this is edgier while the  the overall design remains clean and appealing. Still, it feels like there is some room to punch it up a bit more as it’s definitely not the coolest looking product out there (although it’s close).

Overall, this is a really strong entry into the cold-brew coffee category -- and it’s the best coffee product from Califia yet. We really appreciate their efforts to innovate, especially since it offers something that is going to be hard for other companies to replicate. And in the end, this is up there with the best of them and it’s definitely one of the best nitro cold-brew offerings out there to date.