There is newer review of this brand: Califia Probiotic Non-Dairy Yogurt Drinks

In this review, we’re taking a look at Califia Farms’ three most recent non-coffee offerings: Cali Coco, Ginger Almond Milk, and Matcha Almond Milk. Launched at Expo West 2016, these products are hands down their best flavors yet.

Let’s start with the Matcha Almondmilk. This flavor is a blend of matcha and almond milk, which they’ve sweetened with maple syrup. Rather than going for a super intense matcha flavor, they’ve gone for super smooth -- and they’ve definitely succeeded. There’s a really nice almond flavor to the product, complemented by the slightly grassy matcha. While this is not a replacement for a pure matcha tea, it’s a fine, lighter alternative. 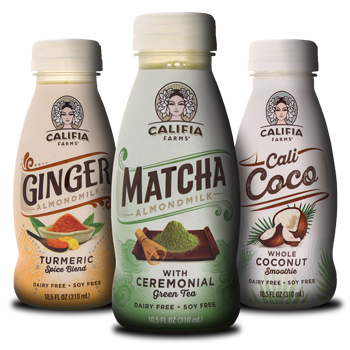 Next, there’s the Ginger Almondmilk, which is also flavored with turmeric and features coconut cream. It’s spicy and complex, with a really fresh note of ginger hitting your tongue almost immediately. They did not skimp on this ingredient, which is a huge plus for anyone who is a ginger fan. The added turmeric and coconut cream are also components of what you taste, but they are really more like secondary flavors. This results in a  layered flavor with the smooth and nutty flavor of almond milk arriving at the end.

Finally, there’s Cali Coco. Unlike the other flavors, which are all almond milk based, this one is a coconut based product. There are only three ingredients: coconut water, coconut cream, and young coconut meat. The resulting product has a really strong coconut flavor, but still maintains a light body. They’ve done a superb job with the formulation of this product, but we wonder if it’s a bit out of place as part of an almond milk line. We say that because it’s both coconut based and a smoothie with higher fat (10g) and calories (150) than the other varieties.

Branding and positioning of these products is very much in line with the other packages that we’ve seen from Califia Farms. They’re packaged in 10.5 oz., fully wrapped plastic bottles and require refrigeration. From an aesthetic perspective, they are clean and easy to read, although there are certain small issues that could be fine-tuned.. Specifically, the disconnect between the ginger and turmeric callouts on the Ginger Almondmilk and the handling of the lack of almond milk on the Cali Coco.

All in all, these are, despite some room for minor tweaks, top notch offerings from Califia Farms. They provide a very nice contrast to their core line, which is very much focused on mainstream flavors, and it’s nice to see them flex their muscles with some more complex and on-trend offerings.