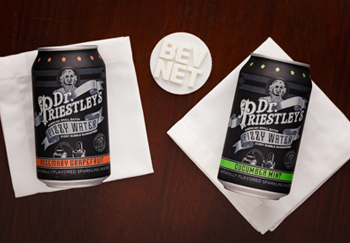 We sampled three of the four flavors, with Original Virgin, their unflavored offering, being the only one that we didn’t get to sample.

The three flavored varieties that we did sample are made with two ingredients: carbonated water and natural flavors. From a taste perspective, we think they’ve made a nice effort to create flavors that are unique and elevated from what other brands are doing.

We were pleased to find that the flavorings are pretty accurate. We were particularly fond of Rosemary Grapefruit and Cucumber Mint; Both were light, crisp, and have a nice balance of flavors. Meyer Lemon Ginger is enjoyable, too, but it’s a bit less exciting than the other two.

As mentioned in this story covering the product’s launch, the brand is named for Dr. Joseph Priestley, who is recognized as the first documented inventor of soda water in 1767. It’s a somewhat unlikely hero for a beverage brand launching in 2019, but they’ve done a nice job of creating an Americana theme that feels modern. A key part of this is the use of a black background with silver and white graphics, which, along with the accent color that’s used to distinguish each flavor, has some nice visual pop.

Still, there are certainly some elements to the product that we have questions about. Specifically, the 1767 “invented by Dr. John Priestly” callout and the “American small batch” tagline. These two things might imply that the product is something that it isn’t, especially since there doesn’t seem to be any benefit to the consumer from either of these things (not to mention that “small batch” is simply because this company is a start up). Finally, there’s the use of “Dr.,” which might imply some functionality and makes the name more of a mouthful than if it were simply called “Priestly’s Fizzy Water.”

Overall, Dr. Priestley's Fizzy Water is a fun and enjoyable entry into the flavored sparkling water category that offers a unique approach to both branding and flavors.