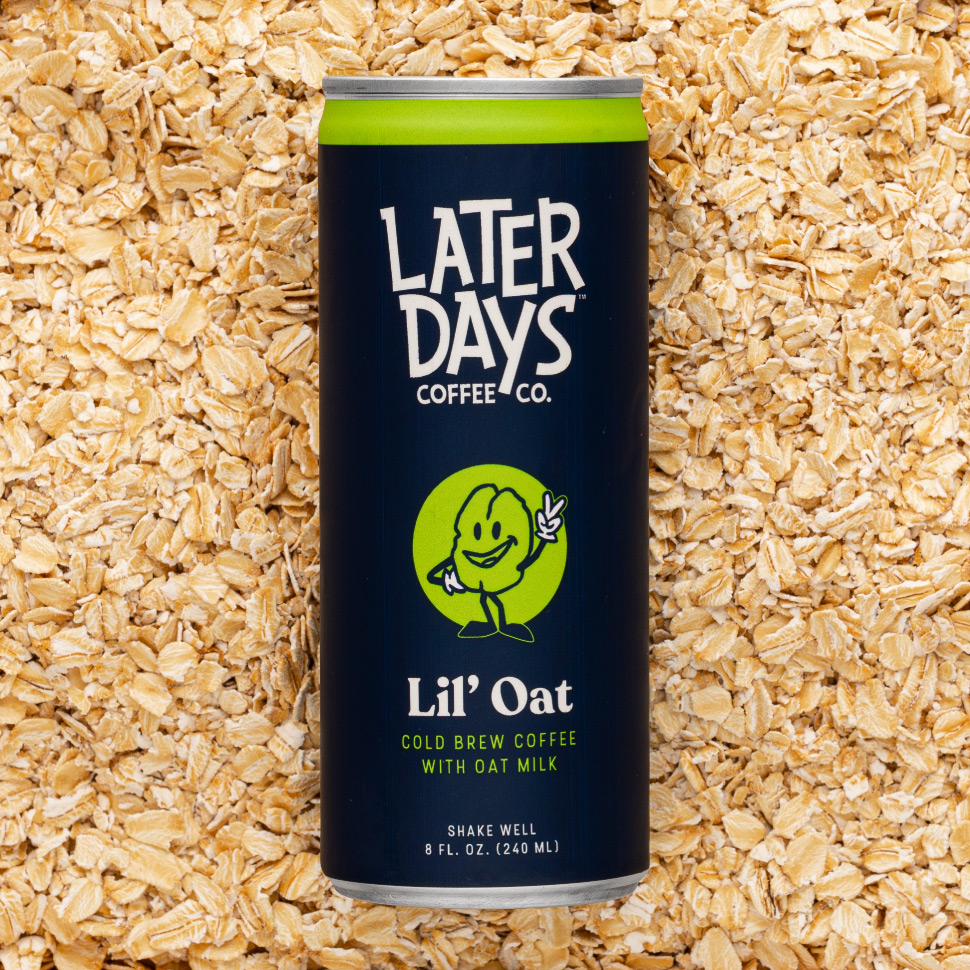 Previously only available in a single unsweetened cold brew coffee SKU packaged in a glass bottle, Later Days Coffee has recently expanded its lineup with the launch of three shelf stable cold brews in 8 ounce cans.

The three SKUs include Nitro Blast, an unsweetened nitro cold-brew SKU, along with two oat milk-based SKUs called Fun Guy and Lil’ Oat. While Lil’ Oat is a straightforward blend of oat milk and cold brew coffee, Fun Guy builds on this with added adaptogenic ingredients including reishi, chaga, and lion’s mane mushrooms. And when it comes to calories, Nitro Blast has 3 calories per can while the oat milk SKUs both have a modest 80 calories per can.

Inside the can, the flavor of all three of these SKUs is quite enjoyable. Starting with Nitro Blast, which is the closest in flavor to the original, the product is well-executed and nails the bold but smooth flavor that we always look for in cold brew coffee and the nitro helps give it a bit of body. Lil’ Oat is also quite straightforward -- just take their base cold brew and add oat milk. It’s creamy but smooth and is also the lone USDA Organic certified SKU.

Finally, there’s Fun Guy, which, thanks to the addition of functional mushroom extracts, has an earthy flavor to it. We actually enjoy the flavor quite a bit, although we found ourselves scratching our heads over the name choice for this SKU as it feels like a missed opportunity to more directly communicate the on-trend ingredients inside the can.

Moving on to the design of the entire line, Later Days uses a shrink sleeve label with a matte finish. The can features a white logo and text against a dark blue background. Each flavor gets a little bit of visual differentiation thanks to an accent color, which is used for a ring along the top of the can as well as in the center of the can, and an illustration of a cartoon-like character that’s tied to the name / ingredients of the SKU. There’s an oat character for Lil’ Oat, a dynamite character for Nitro Blast, and a mushroom character for Fun Guy.

Overall, Later Days Coffee Co.’s latest ready-to-drink offerings pair enjoyable flavor with an approachable and slightly less serious looking design than what we typically see from cold brew coffee brands. We think there’s still a bit of room for improvement with the naming convention -- and we’d also like to see all of the SKUs get USDA Organic certification -- but this is a really nice step forward for the brand.