Debuted back at Expo West 2016, LIVE Sparkling Drinking Vinegars are the first expansion to the company’s product portfolio. Each of the four flavors is USDA Organic certified, low in calories thanks to their use of stevia, and features apple cider and coconut vinegars as the featured functional and flavor ingredients. 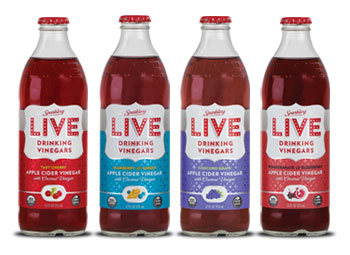 From a taste perspective, what they’ve created is a close cousin to the brand’s kombucha offering. As you’ll notice from the product pictures, the four flavors, which include Pomegranate & Elderberry, Concord Grape, Blueberry & Ginger, and Tart Cherry, are all reddish in color, which is one clue that the flavor profiles are all within the same ballpark. All four of the flavors are light, crisp, and have a tangy finish -- and we’re really fond of each of them even though the differences are pretty subtle.

One thing that’s really nice about all of the flavors is the way that the vinegar masks the flavor of the stevia. There’s no added sugar and the flavors have either 2g or 3g of sugar per 8 oz serving (the sugar content presumably comes from the juice and/or the vinegar). The end result is big on flavor but low on calories: only 15 calories per 8 oz.

The packaging for this product is the same as their kombucha line: a 12 oz. glass bottle that is a custom shape with raised “LIVE” lettering on it. We’re big fans of this bottle, which is intuitively something that contains a sparkling beverage, but doesn’t look like a soda or beer bottle. As for the label itself, it’s definitely nice looking and quickly lets the consumer know that it’s a drinking vinegar. However, the stuff that’s on the lower half seems slightly cluttered and has a variety of different type treatments competing for your eye. We’d certainly like to see this refined in the future.

Putting this all together, LIVE has done a nice job of creating one of the more market-ready vinegar-based offerings that’s currently out there. While it’s hard to say exactly how big the potential is for a product like this, it certainly seems like something that can tag along with their kombucha products, at least in some retail outlets. And for consumers who do pick it up, we think they’ve come up with something that can definitely hold its own in terms of satisfying the consumer’s palate.