by Sail Away Coffee Co

Sail Away Coffee Co.’s Nitro Cold Brew is the follow up to a line of ready to drink cold brew coffees that they released in late 2015. The company, which is based in New York and states that they are in over 200 retail locations in the region, has been offering nitro cold brew in keg format prior to launching this ready to drink line. 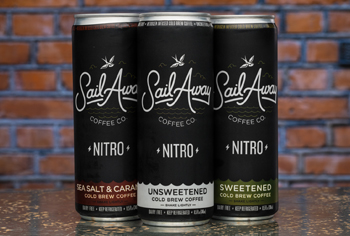 Their nitro line is launching with three SKUs: Unsweetened, Sweetened, and Sea Salt & Caramel. It’s an approach that certainly gives the brand some breadth in terms of having something that will appeal to a variety of different drinkers.

First up, we sampled their “Unsweetened” cold brew. This is nitro cold brew in its purest form and it’s made simply with coffee and water. The product pours with a decent amount of cascade and it tastes very similar to competing products. While there are nuances in Sail Away’s particular coffee roast, it is in a similar boat to other cold brew coffee products in that the differences are not material enough to matter to the average palate. Lastly, we’d rather see this variety called “Original” -- “Unsweetened” sounds like something was taken away, which isn’t the case.

The two sweetened varieties, Sweetened and Sea Salt & Caramel, are really where the brand shines. The Sweetened SKU is spot-on with its level of sweetness (7g of sugar per can) and it’s really more a “touch of sweetness” than a full-on sweetened beverage. The result is something that is still coffee forward but has just a note of sweet at the finish.

The same can be said for Sea Salt & Caramel, although the two added flavors definitely make for a more complex, but balanced product. We’d imagine that this SKU is probably a nice way for the brand to connect with the less serious coffee drinkers.

On the outside, the branding, which was initially used on their still cold brew coffee, which was packaged in PET, looks great on the 11.5 oz. can. It’s clean and easy to read, while the illustrated Sail Away label definitely has an approachable feeling to it. Our only criticism is the placement of the flavor name, which is at very bottom of the can. This might be obscured at retail depending on the type of shelving used (e.g. a gliderack).

In the end, Sail Away’s Nitro Cold Brew is a pretty solid entry into the nitro cold brew space. While we think they need to continue to work to create something that is truly memorable and unique, these offerings can definitely hold their own with what’s out there.