Following the same format as their maple-based soda and seltzer products, Sap!’s Birch product is made by lightly carbonating organic birch sap. 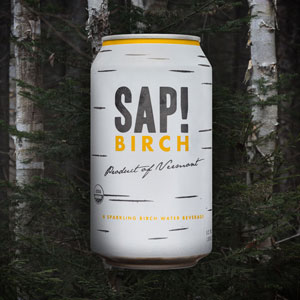 And that’s exactly what it tastes like. If you’ve had Sap! Maple Seltzer, Sap! Birch won’t be too far off. There’s a nuanced difference when it comes to the flavor of birch sap versus maple sap, but for most consumers we think the two will probably be somewhat interchangeable. And the two flavors are separated by only 15 calories and 3g of sugar (25 calories and 6g of sugar for Birch; 40 calories and 9g of sugar for Maple).

In the end, drinking Birch is, much like its maple counterpart, a nice alternative to flavored seltzers that rely heavily on flavorings. It’s clean, refreshing, has a very subtle flavor, and doesn’t leave an aftertaste behind.

Packaging is a standard 12 oz.can. They’ve stuck with the white background and used an even more minimalist design than what you’ll find on their maple products. Specifically, there are lines, which are meant to be birch bark, instead of a leaf.

The only issues we have with this approach are consistency and readability. On the latter, the “Product of Vermont” text is rather hard to read. It requires real focus to read it, which is something that could be easily alleviated. For the former, it’s odd that this product is simply “Birch” whereas their maple products are “Maple Soda” and “Maple Seltzer.” Yet this product, which gets no descriptor, is the lowest calorie of all three. We feel as though there’s a missed opportunity there.

Finally, we wonder if adding birch to a maple brand is something that’s going to help Sap!. This product offers largely the same experience as the Maple Seltzer, which makes us wonder what new consumer base it will help Sap! Reach. Plus, it undermines the nice looking brand that they’ve developed, which features “Sap!” stacked on top of “MAPLE.”

Overall, this is a nice tasting and nice looking product, but we can’t help but wonder if the brand wouldn’t be better off staying focused on maple and perhaps offerings that pair maple with another flavor.