There is newer review of this brand: Sip City Sparkling Switchel

Covers Products: The Boston, The District, The Nashville

Sip City Switchel is a startup beverage company that is, as the name suggests, focused on creating switchel beverages. The company, which hails from Washington, D.C., is positioning the product as “nature’s sports drink & cocktail mixer” and has launched with three flavors. 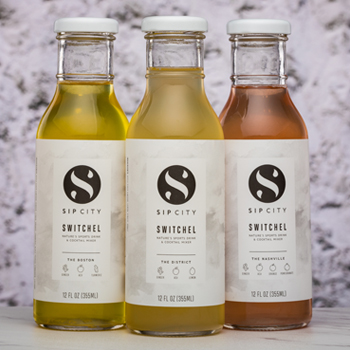 The three flavors, which include The Nashville, The Boston, and The District (more on the names later), all start with a base of apple cider vinegar (ACV), ginger, and citrus (either lemon, orange, or both).

From there, each flavor gets its own twist: The Boston gets a hefty note of turmeric along with pepper, cinnamon, and cayenne, The Nashville gets some some tartness from pomegranate and extra sweetness from honey, and The District doubles down on lemon and drinks almost like a lemonade. The products are all relatively mild in their vinegar flavor and sweetness, with the end result being 60-70 calories and 14-15g of sugar per bottle. Ultimately, these products are pretty solid as far as switchel and ACV based beverages go.

On the outside, we think refinement is needed. While we like the use of a one color design and simple illustrated elements, the approach to the flavor names is definitely not a good one. It’s the first and most obvious place where the consumer really has to stop and think. From there, we think the “Nature’s Sports Drink & Cocktail Mixer” tagline is confusing (are there two things that are bigger opposites?) and shows a lack of focus.

Finally, there seems to be a little too much kitsch to the bottle and the marketing in general. Examples: “WTF is switchel?,” “callmebeepme@sipcitydc.com,” “shake me like a Polaroid picture!” It feels like an effort that’s forced or trying too hard rather than cool and authentic (which is probably what they are going for). And, more importantly, it seems like something that is a distraction -- for both the consumer and the folks who made this -- from making the product intuitive and appealing to the senses.

But don’t take that the wrong way: we definitely see some potential for this product. First and foremost, the liquid is quite enjoyable and it seems to have found a nice balance between being authentic and having the potential for mass appeal. And we like the brand name; it sounds good when it rolls off your tongue. This leaves Sip City in a spot that’s not atypical for a startup brand: the liquid is good but the packaging, messaging, and overall branding need to be tightened up.