Covers Products: The Boston (can), The District (can), The Nashville (can)

Sip City Switchel has changed since our first review: originally a non-carbonated drink packaged in a glass bottle, it has now made the jump to a sparkling formulation in a 12 oz. can. The line, now called Sip City Sparkling Switchel, features the same three flavors as their original lineup, including The Nashville, The District, and The Boston. 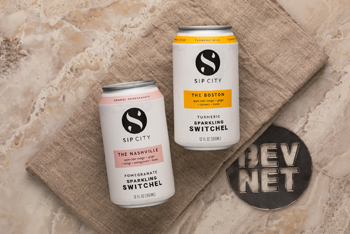 So let’s talk about the move to carbonation, a change we’ve seen most switchel brands adopt. We’ve said this before, but we’ll say it again: we think that this is ultimately where the category will realize its full potential. That said, we are instant fans of Sip City making this switch.

Tasting the liquid inside these cans only strengthens this feeling. All three flavors are very flavorful, crisp, modest in calories (60 per can), and contain a clean and simple list of ingredients that is built around a base of carbonated water, apple cider vinegar (ACV), and ginger.

However, the differences between the three flavors is still pretty subtle; the flavor of the ACV is, despite being pretty mild as far as ACV-based beverages go, clearly front and center. Beyond that, they’ve created a lemon flavor (The District), an orange and pomegranate flavor (The Nashville), and one with turmeric and dialed up spice (The Boston). For The District and The Boston, we’d love to see these accent flavors dialed up a bit. But we were still very pleased with these formulations, and the addition of carbonation makes them feel more sophisticated and enjoyable.

Finally, there’s branding and packaging. This is an area that we noted needed work  in the review of Sip City’s still lineup, and that’s still the case here.. This starts with the names of the flavors, which feel like something that will hurt rather than help the sale because it requires consumers to stop and think. Eliminating the city name and focusing on the flavor that’s currently on the top ring of the can would be a wise business decision, in our opinion.

Beyond that, the design of the can needs refinement and polishing. The current design feels like a somewhat sterile collection of different elements that don’t go together. Instead, we’d like to see something that feels approachable and, at least to some extent, fun. There’s definitely potential to do this with the name Sip City and the logo that they’ve created.

If Sip City can evolve its brand forward, we think there’s a great opportunity for this product to position itself as a flavorful, low calorie carbonated offering for adults.