UbU is a brand of sparkling beverages that includes SKUs that are enhanced with hemp-derived CBD. The company markets two lines -- Hemp Tonic Balance, with CBD, and Natural Energy Focus, which instead features ginseng -- both of which are unsweetened and caffeine free. 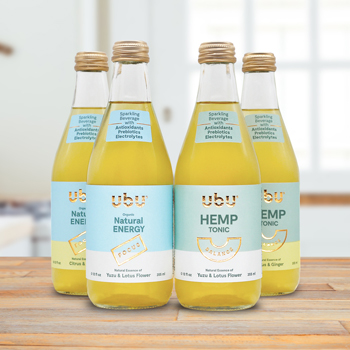 Both lines mirror each other in terms of variety: each is available in Citrus & Ginger and Yuzu & Lotus Flower flavors. . The approach effectively gives the consumer a choice of two flavors and a choice of two functions. However, all four products have baobab, sea salt, agave inulin, and added B vitamins to support the product’s claim (which is promoted on a secondary label that’s on the bottle’s neck) of antioxidants, prebiotics, and electrolytes.

When it comes to taste, UbU is light, dry, and crisp with a slightly herbal flavor. All four of these flavors taste different than one another, with the hemp flavors tasting extra dry and a bit less tart than their non-hemp counterparts. Comparing the Citrus & Ginger with the Yuzu & Lotus Flower, you’ll find some spice to the former while the latter has an almost floral flavor to it.

In the end, all four of these flavors taste like something combines a sparkling water and an herbal tea. They are good, but not to the point where we’d drink them for flavor alone.

Plus, we think they should disclose the amount of hemp CBD in the hemp enhanced varieties. We could not find this information on the bottle or on the company’s web site.

As for the packaging and positioning, there is definitely some work left to do to get this product in a spot where it can be really successful. This starts with the fact that all four SKUs look very similar (almost the same color label and liquid) and, therefore, you’ll have to look closely to tell which is which.

Then again, we question the overall approach of the four SKUs. It’s not clear as to whether these are products that will be sold alongside one another or if one line is a replacement for the other in scenarios where CBD is not appropriate. Regardless, if they are going to sell these two distinct lines, we think that each needs its own brand and personality.

The current strategy of positioning one as a Hemp Tonic (with “Balance”) and the other as Natural Energy (with “Focus”) is definitely confusing and, along with the previously mentioned neck label, is pushing too much functionality at the consumer. What’s lost in the mix is something that appeals to the senses and makes you want to drink this beverage.

That’s not to say that we don’t think there’s an opportunity here. However, we think they need to peel things back and both simplify the pitch and work on its overall appeal as a beverage -- rather than just selling its functionality.