When we first looked at WellWell back in April 2016, we appreciated the effort to create something innovative and memorable but felt as though there was room for improvement in both the formulation and the messaging. 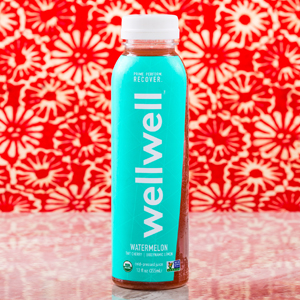 Now, a relatively short eight months later, the company is back with an update. They’ve cut the calories and sugar content so that it now clocks in at about 100 calories per bottle, with 20g of sugar (compared with 150 and 30, respectively, in the old version). This is a meaningful cut and it’s one that has somewhat reshaped the flavor profile. There’s less cherry flavor and more watermelon, which is a lot more palatable and refreshing than the first go around.

While the label design has been adjusted to allow for a see through panel, the bigger update is, at least in our opinion, how they’ve changed the text on the label. The “vital hydration for a life in motion” tag line has been replaced with “Prime. Perform. Recover.” which is a bit more direct with regards to the product’s purpose. Also, they’ve made the cold-pressed juice callout much more subtle, which takes it from the product’s reason for being to something that’s simply an attribute.

But the most important change is how they’ve dialed in on watermelon as the flavor. In the first version, it listed watermelon, cherry, and lemon with equal prominence, which left us wondering what the liquid would taste like. With the formulation change and the new emphasis on watermelon, it feels a lot more intuitive.

While all of these changes seem like a step in the right direction, our concern about this product’s unique appearance, which doesn’t really fit with the juice category, still remains to some extent. The shift that they’ve made definitely pushes it more towards a performance or sports drink, but the product still functions more like a juice in that it requires refrigeration and is very perishable. We’re not quite sure how they should navigate this, but it’s definitely a hurdle that they’ll have to figure out how to clear as time goes on.

Overall, we always love to see brands evolve and continue to innovate -- and WellWell’s updated packaging and formulation are a step in the right direction.