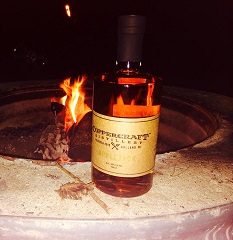 Holland, Mich. (September 29, 2014) – Coppercraft Distillery, a Holland-based distiller of quality spirits with a focus on local ingredients and production, today announced the release of its new Applejack product. The classic apple brandy is a perfect fall beverage and dates back to the Colonial era as one of the first widely consumed distilled spirits in America.

“We are incredibly proud to offer what we feel is one of the most delicious distilled spirits on the market anywhere today,” said Walter Catton III, Owner and Co-Founder of Coppercraft Distillery. “Our Applejack is completely unique. It is made using multiple varieties of Michigan apples and is distilled and barrel aged here in our distillery. We hope people enjoy tasting our Applejack as much as we enjoyed creating it.”

Coppercraft Applejack accentuates fresh fruit using 32 varieties of Michigan apples in the fermentation. It leads with an aroma of crisp apple followed by sweet notes of vanilla and butterscotch. In the flavors you’ll taste fresh fruit, vanilla and toffee finishing with a slight spice. It is delicious on its own or blended in a cocktail.

Applejack’s history as an American distilled spirit dates back to Colonial times. It is thought to be one of the first and most popular distilled spirits in American history, originally made by freezing fermented apple cider. Coppercraft distills its Applejack through modern evaporative distilling in its American-made Vendome copper still with fermented apples provided by Virtue Cider in Fennville, Michigan.

Coppercraft Applejack is available at retailers of fine spirits and at bars and restaurants in Michigan and Chicago.

With simple ingredients grown by local farmers, Coppercraft Distillery creates a full line of distilled spirits that celebrates the harvest, as well as a shared passion for hard work, exceptional quality, and genuine relationships. Coppercraft Distillery is proud to present the community with a premium experience from grain-to-glass. Founded in 2012, Coppercraft Distillery joins the ranks of more than 30 other licensed companies in Michigan, a state that ranks sixth in the nation for distilleries. Industry experts estimate that the growing market for handcrafted spirits could add $400 million to the state economy in 2014. Coppercraft Distillery products are distributed by General Wine and Spirits in Michigan and are also available in the Chicago and Colorado markets.