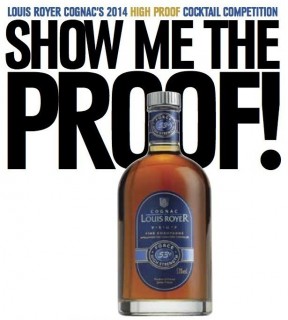 Competition Attracts 109 Recipe Submissions from Across the U.S., Underscoring the Overproof Cognac Trend

NEW YORK, Nov. 19, 2014 /PRNewswire/ — Louis Royer, an iconic Cognac house dating to 1853 and led by the fifth generation of its founding family, today announces the seven finalists of the third annual “Show Me the Proof!” High Proof Cognac Cocktail Competition. It celebrates Louis Royer “Force 53” VSOP Cognac, which the mixology community has embraced as much for its finesse as its strength. The spirit is at the forefront of reviving Cognac’s historic role as a prime cocktail ingredient. More than 109 recipes were submitted by craft bartenders across the country, proving the popularity of high proof Cognac as a highly versatile spirit for cocktails.

The finalists will compete in New York City at Bacchanal restaurant on December 1, 2014 for a Grand Prize of an all-expense paid trip to Jarnac and Paris in France, as well as $1,000 in cash prizes for both second and third places.

The seven finalists, in first-name alphabetical order, are as follows:

It will be judged by leading lights of the spirits/cocktail industry:

“We are delighted by the craft bartending community’s burgeoning enthusiasm for ‘Force 53’ and their limitless creativity exhibited by their sophisticated cocktail applications. The number of recipes submitted this year actually exceeded last year’s,” says Nicolas Royer, U.S. Brand Ambassador and a sixth-generation member of the Royer family. “The finalists showed us the proof that they deeply understand ‘Force 53’ and the flavor potential that it brings to cocktails.”

The cocktail recipe compilation was executed by the competition’s partner, ShakeStir.com, a leading online community of thousands of bartenders and mixologists, which promoted it to its members.

Founded in 1853, Louis Royer is an iconic Cognac house located on the banks of the Charente River in Jarnac, France. It is a revered producer of award-winning Cognacs, including VSOP, high proof and XO expressions. In 2013, Louis Royer “Force 53” VSOP Cognac received a “Best in Show” Double Gold Medal at the San Francisco Wine & Spirits Competition and the house’s XO was awarded a Gold Medal. In addition, XO was named among the World’s Top 120 Spirits by Paul Pacult’s renowned The Spirit Journal. Master Blender Laurent Robin works closely with Master Selector Jerome Royer, a fifth-generation family member, together with Master Distiller Monia Martin, to meld together fine eaux-de-vie to create Cognacs of remarkable complexity and approachability. They exemplify the house’s bee emblem that symbolizes its passion for work, organization and commitment. For more information, please visit www.louis-royer.com.  On social media, please follow us on Twitter at @Force53cognac and like us on Facebook at www.facebook.com/LOUISROYERCOGNAC.