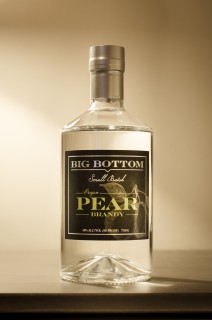 HILLSBORO, OR – (August 5, 2015) – Big Bottom Distilling, producer of award-winning Big Bottom Small Batch whiskey and gin, continues the expansion of their in-house distilled line of spirits. They have released an Oregon Pear Brandy which is the first of the two fruit brandies set to release in 2015. The Oregon Pear Brandy is proofed at 80 and retails in Oregon at $44.95 for a 750 ml bottle.

Since bringing distillation in house in 2014, Big Bottom Distilling strives to distill products that capture the spirit of Oregon. Their Oregon Pear Brandy is made from a blend of Asian pears that were grown and hand harvested locally from the Willamette Valley. Exhibiting a fresh ripe Asian pear nose, the brandy unveils sweet and earthy characters while finishing with some moderate spice.

Big Bottom has been working on the brandy project for over a year as it has been a personal passion for their lead distiller, Travis Schoney. In addition to the pear brandy, the Oregon Apple Brandy will be released in early fall 2015.

“Taking fruit at its prime ripeness and being able to transform those same characteristics from fruit to bottle is an art form,” Schoney said. “We hand-picked this blend of pears for their unique qualities that we felt best embodied Oregon.”

“Our brandy line is just another example of our commitment to making a variety of exceptional, small batch spirits”, says Big Bottom Distilling Owner, Ted Pappas. “Even though whiskey has been our forte, we want to appeal to a larger audience by offering a wider range of high quality spirits.”

Big Bottom Distilling, LLC Founder and President of the Oregon Distiller’s Guild, Ted Pappas, started the company in 2010. As a 1991 graduate of The Citadel, The Military College of South Carolina, all of Pappas’ products are proofed at 91° as a tribute to his classmates. The company started as an independent bottler with the release of several Big Bottom Whiskey and Calhoun Bros. straight bourbon and rum products. Big Bottom products retail from $21.95 to $44.95 and are sold in Oregon, Washington, California, Nevada, Arizona, Illinois, Georgia and South Carolina. Big Bottom is named after an area in the Clackamas Wilderness located in the Mount Hood National Forest. It houses some of the region’s largest western red cedars and is under federal protection due to the Lewis and Clark Mt. Hood Wilderness Act signed in 2009. The company’s mission is to support Oregon conservation and wildlife efforts. The Big Bottom tasting room is located off NW Cornelius Pass Road on NW Nicholas Court and is open Saturdays from noon to 4 p.m. or by appointment. For more information, please visit www.bigbottomdistilling.com or call (503) 608-7816. You can follow the company on Facebook at: https://www.facebook.com/BigBottomWhiskey and Twitter: @bbdistilling.