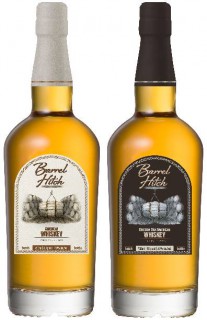 The new whiskeys join Eastside’s already broad line of spirits that include the award-winning Burnside Bourbon and Burnside ‘Oregon Oaked’ Bourbon, as well as the award winning flavored whiskeys, Marionberry and Cherry Bomb.

Eastside’s master distiller, Melissa Heim, and its chief branding officer, Carrie Earles, collaborated to create the Barrel Hitch brand with one goal in mind: make a premium American whiskey enjoyable by all. Extra smooth and approachable as well as reasonably priced, these whiskeys were crafted to create instant appeal for both new and experienced whiskey drinkers wanting to savor a spirit for the ages — pure, simple, no gimmicks.

Bottled at 80 proof, Barrel Hitch American Whiskey hits the mark with a smooth body, toasted oak and hints of green apple and vanilla. Its remarkable flavor profile is the result of a meticulous blending process of carefully selected finished whiskey sources. Every source contributes a unique scent, flavor, mouth feel and color that is expertly balanced for consistency and quality. Eastside’s spirit crafting process represents the true marriage of art and science.

The waters required in the crafting process to standardize the proof are sourced from the Bull Run watershed, an ecologically protected reservoir that collects rainfall and melting snow descending from Oregon’s majestic Cascade Mountains. These crystal clear waters flow freely and purely over an ancient layer of basalt bedrock on its way to Eastside’s distillery on Portland Distillery Row, where the unique mineral composition of these natural waters contributes to the distinct and alluring flavor profiles of these new American Whiskeys.

“We’re launching these new whiskeys into the fastest growing category of the spirits market, which hit $23.1 billion last year,” noted Eastside Distilling CEO, Steven Earles. “This record growth is largely being driven by a newer generation of spirits drinkers, and particularly women, who are discovering whiskey as a refreshing alternative to vodka and rum.

“Today’s new whiskey drinkers are not limited by tradition, but seek the best-tasting, most full-flavored experience they can find. In this regard, our new Barrel Hitch whiskeys hit the mark straight on. We expect them to develop the same phenomenal loyalty and growing demand created by our other spirits, which have received numerous industry awards for quality, taste, innovation and branding.”

Eastside’s new American whiskeys have received listing approval by the Oregon Liquor Control Commission, and the company is preparing initial shipments for distribution to Oregon’s state-run liquor stores, with the rollout to other states planned to soon follow. Over the course of the last few months, Eastside has expanded distribution to three new states, now totaling nine, with the ongoing national expansion supported by some of the nation’s leading distributors.

Flavor: Clean grain with subtle earthy, grassy notes. Covers entire palate with a comforting spice similar to cardamom. The oak opens with dessert tannins like vanilla and lends the subtlety of honeycomb. The flavor takes a pleasant turn towards dry, cured oak and warm caramel. This is a wonderfully balanced sipping whiskey that is low octane and truly original.

Flavor: Immediate dessert tannins with a medium octane punch. Lingers on upper palate with white oak, caramel, coal and vanilla. Flavor remains with you long after you’ve enjoyed your sip.

About the OLCC
The Oregon Liquor Control Commission (OLCC) was created in 1933 by a special session of the Legislature after national prohibition ended. Oregon is a control state with the exclusive right to sell packaged distilled spirits, which are dispersed statewide from a distribution center in Portland and sold in 242 retail liquor stores operated by contracted agents. The agency is headquartered in Portland with regional offices in Bend, Eugene, Medford and Salem. The OLCC distributed more than $416 million in the last two years to Oregon’s General Fund, Cities, Counties, and Drug/Alcohol Abuse Programs. This money helps fund essential services such as schools, police and healthcare for Oregonians.

About Eastside Distilling
Eastside Distilling, Inc. (OTCQB: ESDI) has been producing high-quality, master crafted spirits since 2008 and is located in Southeast Portland’s Distillery Row. Makers of award winning spirits, the company is unique in the marketplace and is distinguished by its highly decorated product line-up that includes Burnside Bourbon, Below Deck Rums, Portland Potato Vodka and a distinctive line of infused whiskeys. All Eastside spirits are master crafted from natural ingredients for unparalleled quality and taste. The company is publicly traded under the symbol OTCQB: ESDI. For more information visit: www.eastsidedistilling.com or follow the company on: Twitter & Facebook.