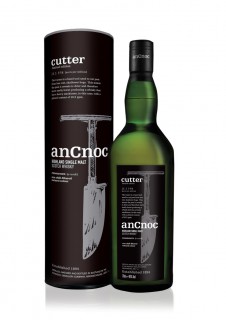 NEW YORK, NY–(Marketwired – April 02, 2015) – anCnoc (pronounced a-NOCK), a Highland Single Malt Scotch Whisky produced at the Knockdhu Distillery, today announces the launch of Cutter — the third expression in its Limited Edition Peaty Collection — in the U.S. market. The new release follows Rutter and Flaughter, the first two expressions within the range, which were released last year.

True to the distillery’s unconventional nature, anCnoc breaks from the traditional Highland style with the production of its Limited Edition Peaty Collection, named after traditional peat-cutting tools. The initial expressions, Rutter and Flaughter, show a delicate dark smokiness (between 11 to 15 parts per million phenol). Cutter is the most intense expression within the range (at 20.5 parts per million phenol).

When Knockdhu Distillery was established in 1894, peat was commonly used as a source of fuel throughout the Highlands. The makers of anCnoc believe that whisky made at the distillery was undoubtedly peaty at the time, but over the years evolved to present-day unpeated style that the Highlands are now known for. The Limited Edition Peaty Collection serves as a nod to this forgotten historical note, including Cutter — which was named for a hand tool used to cut peat from less wet, shallower bogs. The peat it revealed was drier and therefore more easily burnt, producing a whisky that has a medium-heavy smokiness.

“We are very excited about the launch of Cutter. Given the great feedback and accolades that we received for Rutter and Flaughter, we know that the release of Cutter has been highly anticipated,” said Distillery Manager Gordon Bruce. “This range is very near and dear to our hearts, as it reflects the heritage of the anCnoc distillery. Cutter, being the most robust of the range thus far, truly expresses the essence of the collection and, thereby, anCnoc’s roots.”

Cutter is unmistakably peaty, with thick and oily smoke structure followed by piercing burst of fruitiness, ripe peaches and just a touch of oak on the nose. On the palate, Cutter reveals notes of slight apple-core bitterness, leather and spicy vanilla. Sharper notes of pink grapefruit and ripe orchard fruits are also present. The whisky was matured in American oak, ex-bourbon casks and bottled at 46 percent ABV and contains 20.5 PPM phenol.

anCnoc Cutter will be available on April 1 throughout the U.S. at a suggested retail price of $85. For more information, visit http://ancnoc.com/.

anCnoc (pronounced a-NOCK) is a single malt Scotch whisky created using a traditional process that has changed very little over time. anCnoc is Gaelic for the nearby Knock Hill, and its home distillery is Knockdhu, which means “black hill” in Gaelic. Located on the very edge of Speyside, the Knock estate sits on land rich in peat. The fine single malt is created using traditional production methods, to make a refreshingly modern whisky.

International Beverage, Inc. (www.interbevgroup.com) was established in 2005 as the international arm of ThaiBev, one of South East Asia’s leading alcohol beverage companies. With a network of regional offices in Asia, Europe and North America, the company is responsible for the production, sales, marketing and distribution of a portfolio of premium global brands in more than 80 countries and territories. The company’s success is built on a strong understanding of local cultures and markets along with the creation of a global operational network.