SAN DIEGO, CA – MARCH 25th, 2015 — Old Harbor Distilling Company, a brand new San Diego-based distiller of premium craft spirits and the first licensed distillery in the city’s sprawl-ing downtown, is pleased to announce its premiere release — San Miguel Southwestern Gin — to the marketplace. The dry gin is handcrafted from fresh, locally grown botanicals with flavors typically found in Mexican cuisine, including cilantro, coriander, lime, sage, cucumber and Italian juniper berries. Heavily influenced by Spanish and Mexican cultures, San Miguel is named after the original title bestowed upon San Diego by Juan Rodriguez Cabrillo, the famed explorer who claimed the coastal city for Spain in 1542 and opened the Southwest to discovery.

Old Harbor distills a variety of flagship spirits in a 1,000-liter copper pot still christened “The Belafonte” (a reference to the research vessel in The Life Aquatic with Steve Zissou) in its newly opened 7,500-square-foot distillery and tasting room in San Diego’s East Village neighborhood. The hybrid column-pot still was designed to produce clean spirits that aren’t overly purified or bland, allowing for more precise control over which flavors to keep and which to discard. Each of the eight still plates is adjustable to provide the ideal amount of reflux for the type of spirit being created, whether a robust smoked whiskey or a bright flavorful gin. 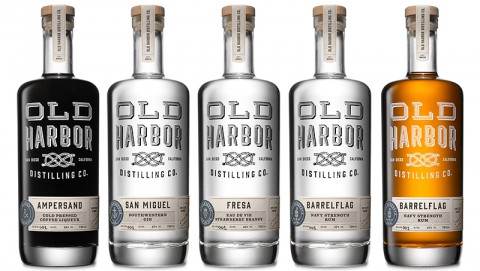 San Miguel Southwestern Gin encapsulates the company’s ethos of keeping things local — transcending all processes, from the ingredients plucked from the ground to the look of the glass bottle itself. Careful-ly handcrafted by Old Harbor Founder and Distiller Michael Skubic, a brewer turned distiller who was co-founder of San Diego’s Hess Brewing Company, San Miguel has a rich, juicy palate that pleasantly evolves into a deep pepper heat with round cucumber sweetness. The aroma is rich with notes of freshly cut cilantro, sage and lime zest, giving way to a surprising-ly complex flavor – each botanical harmonizing to become greater than the sum of their parts. This is a spicy, bright and intensely herbal gin that is versatile enough to be enjoyed neat, but holds up beautifully in a variety of well-balanced classic and modern cocktail interpretations.

Sourced from Saver Glass in France, San Miguel’s bottle design is reflective of the overall nautical branding aesthetic of Old Harbor — a nod to San Diego’s rich his-tory as a maritime city. Distinguishing features include a nautical inspired color palette with accents that evoke a sense of nostalgia: the texture of nautical rope, military-esque font and the age-old hom-age to maritime life, an anchor.

San Miguel is hand bottled at 94 proof (47%ABV) and is currently available for purchase at fine liquor stores and a va-riety of on-premise restaurants and bars countywide. San Miguel has a suggested retail price of $25.99 for a 750 ml bottle.

Continued nationwide distribution is planned for 2015.

“San Diego is one of the best cities in the world for growing produce — we have access to year-round botanicals for our gin,” says Michael Skubic, Old Harbor Distilling Company founder. “This city is maturing on both the beverage front and the restaurant front, with a focus on ac-cess to locally sourced products. We are excited for the future as we get to collab-orate with more and more local suppliers and retailers.

The distillery will gradually increase its portfolio with 2015 releases to include Barrelman, a navy strength (114-Proof) white rum and a barrel-aged version that is aged for a minimum of six months in a variety of oak barrels then blended to taste. Also on tap is Ampersand, a cof-fee liqueur made with Barrelman rum as a base and blended with Coffee & Tea Collective’s cold pressed coffee; 1542 California Native Botanical Gin, made with native herbs and plants such as California juniper, sagebrush and lem-on verbena. Future planned spirits in-clude SMASH, a single malt and single hop amaro, a selection of seasonal eau de vies and a number of whiskies in the works with more details to be released as their arrivals approach.