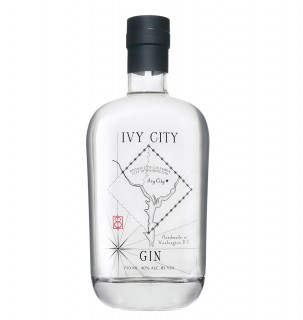 WASHINGTON, June 5, 2015 /PRNewswire/ — The wait is over – the gin is in! One Eight Distilling will introduce its first gin to market with the release of Ivy City Gin, an American dry gin distilled from locally-sourced grains (63% rye, 26% corn, and 11% malted rye), with forward notes of Juniper and Spicebush, and a subtle bouquet of additional botanicals.

Ivy City Gin will be sold at the distillery and at participating Washington, D.C. retailers beginning on Friday, June 12th, followed by distribution to area bars and restaurants later in June. As part of its ongoing commitment to the Ward 5 community, One Eight Distilling will donate $1 from every bottle sold in D.C. this year to Habitat for Humanity of Washington, D.C. in support of ongoing projects in Ivy City.

“We are proud to debut Ivy City Gin in a way that promotes our city and benefits our community,” explained One Eight Distilling co-founder Alexander (Sandy) Wood. “We are fortunate to be able to partner with others who are doing great work in this neighborhood with a series of Ivy City Gin release events centered here in Ivy City.”

To kick off the weekend of Ivy City Gin celebrations, the distillery is hosting “100 Bottles of Gin on the Wall,” an official release party at the distillery, on Friday, June 12th from 6:00-8:00 p.m. Tickets ($50)include a signed bottle and two signature cocktails (stirred by guest bartenders David Fritzler and Daniel McCombie, from Tryst Restaurant Group). Tickets and details at ivycitygin.eventbrite.com. Bottles and cocktails will also be available during Tour & Tasting hours at the distillery on Saturday, June 13th from 1:00-4:00 p.m.Additionally, the CapitalBop DC Jazz Loft Series at the DC Jazz Fest will feature an exclusive bar serving Ivy City Gin and other One Eight Distilling spirits, during a series of performances at the Hecht Warehouse (1401 New York Avenue NE in Ivy City), June 11th-13th (details at capitalbop.eventbrite.com).

All Ivy City Gin events are open to guests ages 21 and over with valid I.D.