Austin, Texas – May 8, 2015 — Three Austin-based liquor companies have combined to create the first Liquor House in Texas, a conglomerated company that both produces and imports spirits. Empresario LLC was formed by the merger among Pepe Zevada Z Tequila, Paula’s Texas Spirits, and Republic Tequila. Its aim is to grow to join the ranks of American liquor houses such as Sazerac and Brown-Forman while maintaining strong Texas roots.

Empresario’s CEO Glynn Bloomquist was formerly the CEO of Z Tequila. Bloomquist has spent over thirty years developing and growing businesses. In Austin he has worked with companies such as Back-In-A-Flash, Barton Medical, and Current Solutions. Gary Kelleher, creator and co-founder of Dripping Springs Vodka, and CEO of Paula’s Texas Spirits since 2013, will serve as COO of the new company. Jose “Pepe” Zevada, founder of Z Tequila, and Tom Nall, founder of Republic Tequila, will serve as directors. Paula Angerstein, founder of Paula’s Texas Spirits, will continue in an advisory role. 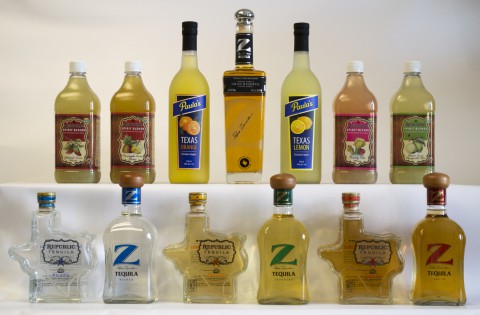 Empresario’s award-winning portfolio currently includes seven tequilas, two liqueurs, and a line of all natural cocktail mixers. Empresario will launch two additional liqueurs this year and is in discussions regarding additional brand acquisitions. Empresario has “a single-minded focus of developing, creating, branding, and nurturing Texas-based spirit brands,” says Bloomquist. Angerstein adds that with this combination of high quality craft spirits all under one roof, “it will be impossible for consumers not to take notice.”

Moses Austin and his son Stephen F. Austin, the father of Texas, were among several people in the 1800s to be awarded land grants by the Mexican government to settle what is now Texas. Recipients of these grants were called Empresarios, the Spanish word for entrepreneur. In more recent history, Paula Angerstein and Gary Kelleher carried on the Texas entrepreneurial spirit, receiving the second and third distilling permits in the state. While Tito Beveridge had been distilling in Texas for ten years, Angerstein and Kelleher, among several other liquor Empresarios, kick-started the Texas Spirits Industry, which hasn’t slowed down since and now boasts upwards of fifty distilleries across the state.

Kelleher says of the merger, “I am honored to be part of this historic partnership establishing the first Texas company to create, brand, distill, import, and market world-class craft spirits. Our team of pioneers has the perfect balance of expertise, high standards, and audacity. Together we will have an impact on the Texas Spirits Industry that will be felt worldwide.”