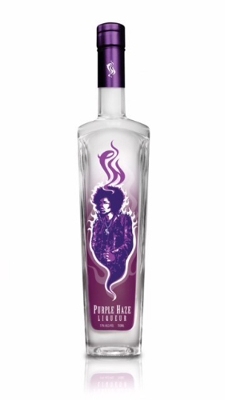 Purple Haze Liqueur will delight consumers with a mildly sweet and unique blend of vodka, cognac and exotic berries. At 34 proof, the premium liqueur is developed to the highest level of perfection for a taste that cannot be extinguished. Inspired by a fierce commitment to true originality, Tiger Paw Beverages Inc. has created a planned premium portfolio of alcohol beverage products inspired by the numerous titles of classic Jimi Hendrix songs, which are amongst the most famous in music history by an artist many consider the most gifted instrumentalist ever.

“I wanted to produce a high quality product that consumers would love while honoring my brother Jimi, and all of his amazing work,” said Leon. “He would drink Purple Haze Liqueur if he could be here with us today.”

In a cocktail form, the liqueur can be mixed with Sprite, champagne or Brand Ambassador DJ Quik’s favorite, pomegranate juice. Also enjoyed by Brand Ambassador King Chip (recording artist), who prefers to top it off with his favorite cognac or Lil’ Fizz’s dirty Sprite remix (Love & Hip Hop Hollywood).

Available at over 200 locations in Atlanta, Savannah and Athens, GA. The distribution will continue to expand into California in November 2015. http://www.tigerpawbeverages.com/purplehaze