“Orphan Street Brandy is the result of an experiment that began over two years ago, when we acquired an ‘orphan’ lot of wine,” Jedd Haas, President of Atelier Vie explained. “We distilled the wine; the results were interesting, but it was obvious that the distillate needed togo into a barrel for years of aging to reach its full potential,” Haas continued.

So into the barrel it went. A small barrel that had previously been used for three different types of whiskey in succession. The barrel had acquired a patina of different flavors, which only added to the complexity and depth of flavor in the brandy over the years. 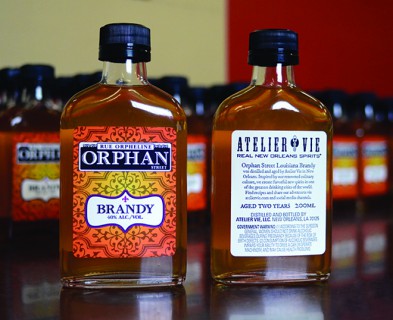 By Federal law, brandy distilled from grapes must be aged at least two years in oak barrels in order to be legally called “brandy.” Any less than that and it must be called “immature brandy.”

“Who wants to drink immature brandy?” Haas asked. “After two years in this small barrel,the brandy acquired a wonderful aroma and intense flavors. Following some sensory evaluation just past the two year mark, it was clearly time to bottle it,” Haas added.

You might wonder about the name of this spirit; but there is an explanation stemming  geography. Scattered throughout the city of New Orleans, one finds a number of curiously short streets. Church St. in the Central Business District. Architect St. in the Bywater. Madison St., Wilkinson Row, and Clinton St., all in the French Quarter. These orphan streets seem almost like accidents, remnants out of place within the overall grid.

Likewise, a remnant lot of wine came our way. These orphan bottles were put to good use and distilled into brandy. Orphan Street Brandy reflects this heritage; one of accidental journeys, leftover scraps of geography, and fortuitous crossings. The label contains references to this origin, with typography and design inspired by the street signs of theFrench Quarter, antique iron work, and the symbol of New Orleans, the fleur-de-lis.Orphan Street Brandy is bottled at 80 proof (40% Alc./Vol.) in 200ml flasks. Available only at the distillery, the flasks sell for $20 each. Quantities are limited.

Visiting Hours at the Distillery

The distillery is open for tastings and discussion of the distillation process every weekend from 10-2 on both Saturday and Sunday. There is no charge to visit the distillery and the company’s full line of spirits is available for retail purchase during these weekend hours.Visitors should see the company web site for directions and additional details,http://ateliervie.com/visit.

Inspired by our renowned culinary culture, Atelier Vie creates flavorful new spirits in one ofthe greatest drinking cities of the world. “Liquor is art you can drink.” Atelier Vie wasfounded in 2011 by Jedd Haas.