FRANKFORT, FRANKLIN COUNTY, KY (May 11, 2016) Buffalo Trace Distillery has engaged in an unconventional way to use infrared light waves for its latest bourbon experiment, applying the light waves to barrels before charring, with the goal of learning how new and different flavors can be drawn from the oak.

Working with barrel cooper Independent Stave Company in 2009, eight special barrels were constructed. All eight first underwent the same process as standard Buffalo Trace barrels, staves were open air seasoned for six months before being made into barrels. 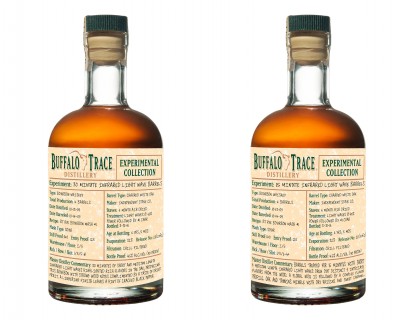 After six and a half years of aging, the bourbon from both barrels expressed distinct flavor notes of wood, caramel, and vanilla, as well as pepper flavors drawn from the oak. Another observation from the experiment was the short wave infrared light seemed to affect more of the inner layers of the wood, while the medium wave infrared light affected the surface and medium layers.

These barrels are part of more than 5,000 experimental barrels of whiskey aging in the warehouses of Buffalo Trace Distillery. Each of them has unique characteristics that differentiate them in distinct ways. Some examples of experiments include unique mash bills, types of wood, and different barrel toasts. In order to further increase the scope, flexibility, and range of the experimental program, an entire micro distillery, named The Colonel E.H. Taylor, Jr. “OFC” Micro Distillery, complete with cookers, fermenting tanks, and a state-of-the-art micro still has been constructed within Buffalo Trace Distillery. Buffalo Trace has increased its commitment to experimentation with the recent addition of its Warehouse X. Although small in size, Warehouse X is designed to explore the extent of environmental influences on the flavor profiles of whiskey.