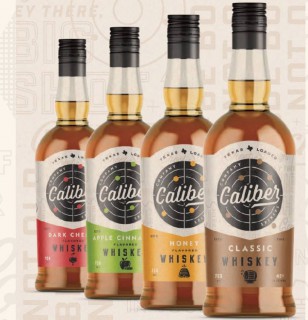 HOUSTON, Aug. 4, 2016 /PRNewswire/ — As American whiskey continues to increase its presence on the global stage and demand surges, storied distilleries in Kentucky and newcomers located up and down the east and west coasts are experimenting with various distilling and aging techniques to create products that stand out in an increasingly saturated market. But flavored whiskey – a category that many aficionados proudly reject – remains largely untouched by smaller companies.

Caliber Company Spirits based out of Houston launches this August in Texas, South Carolina, Georgia and Arkansas. Caliber whiskeys combine all American whiskey and natural flavors for a unique range of products tailor-made for the millennial generation.

“The idea was born last year after we saw an opportunity to create something completely different than what we currently produce. We received a lot of requests for honey whiskey and with the explosion of flavored whiskey’s thought this could be a very interesting brand,” says Ryan Baird, Caliber Co. Spirits President. After a recent opportunity arose to hire the former Master Distiller for Deep Eddy Vodka Distillery based in Austin, the team knew they had something special. “We have great respect for the Deep Eddy crew and knew Jeff would be perfect for the job as Master Blender on this new project.”

“It was an incredible experience being a part of the team that built Deep Eddy from the ground up: we started as a small Austindistillery with one product and evolved into a nationally recognized brand of six distinct flavored vodkas,” Weed says. “But I wanted to experiment with creating unique flavor profiles based on a different spirit, and when the opportunity to work with Caliber came along, I knew it was a perfect fit.”

Millennials are looking for entry level whiskeys that are less pretentious and easy to drink. This demographic wants to experiment with whiskey without losing some of their favorite vodka flavors. Craft whiskey is attracting new followers and significant fanfare but there is still a large group of consumers who are looking for a more affordable and approachable whiskey. The natural consumption cycle indicates that those shifting from flavored vodkas will experiment with whiskey among other spirits.

Caliber Co. Spirits is launching four distinct flavors that are excellent for sipping, easy to use in cocktails and are perfect for your favorite shot.

“Texas whiskey the way it was meant to be – Bold, a little bit wild, and with a whole lot of character,” is Caliber’s tagline. In lieu of tasting notes, animated characters accompany each flavor, bringing the flavors to life with descriptions like “heavy artillery” and “sweet shot.”