NEW YORK, Sept. 1, 2016 /PRNewswire/ — Today Sean “Diddy” Combs and the Makers of the CÎROC Ultra Premium Vodka unveil new brand creative and launch a motivational campaign: ‘Let’s Get It’. ‘Let’s Get It’, which is inspired by Combs and features DJ Khaled and French Montana, sparks a movement to empower and encourage entrepreneurs and creators to pursue their passions and realize their dreams.

The campaign is a collaboration between Combs, CÎROC and emerging influencers committed to inspiring the next generation to ‘Get It’. The vibrant creative centers on the iconic “circumflex,” which symbolizes upward mobility, aspiration and the brand’s French heritage. The creative was developed by 72andSunny New York in partnership with Combs Wine & Spirits and Diageo. 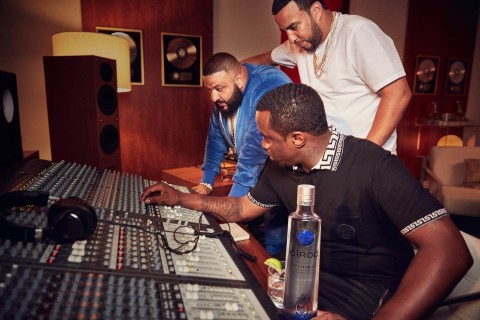 “I grew up wanting to change the world. Now I want to inspire and empower the next generation to dream big, work hard, and make their own success,” said Sean “Diddy” Combs. “I am using my story to encourage others to follow their dreams and achieve greatness, and together with CÎROC, fueling the spirit of the hustle and celebrating the journey.”

Sean “Diddy” Combs previewed his commitment to the ‘Let’s Get It’ ethos when he presented at the 2016 MTV Video Music Awards on Sunday night. He reminded the audience to hustle hard, dream big and remember that everything is possible.

“‘Let’s Get It’ is much more than a campaign,” says Ryan Robertson, CÎROC Brand Director. “It is the start of a new movement – a rallying cry – to empower hard workers and dreamers to make their mark on the world.”

Later this month the brand will be releasing a follow-up spot to ‘Let’s Get It’ that spotlights DJ Khaled and his major keys to success for future moguls in the making.

“CÎROC and Combs have always been about the hustle”, says Dia Simms, President of Combs Wine and Spirits. ‘”Let’s Get It’ is a universal message that has no boundaries. Sean and CÎROC are inspiring the next generation of entrepreneurs and culture creators on their journey to success.”

‘Let’s Get It’ begins airing September 5th. The :30 and :15 second spots will run on CNN, Bravo, CNBC, USA, BET, VH1, TV1, REVOLT and more. The brand has also created a :15 advertisement dedicated to social responsibility reminding fans that whether you are coming up in the world or coming home from a few drinks, get there safely.

In addition, CÎROC announced that it is partnering with COMPLEX Media to create a new video channel dedicated to the ‘Let’s Get It’ movement. “COMPLEX Hustle” will mentor, inspire and advise the creative class of millennial strivers. More information about this project will be released soon.

From creators to innovators, the Makers of CÎROC remind everyone to Celebrate Life Responsibly.

Let’s Get It Campaign :30 ad can be found here – www.bit.ly/2bCQVNp

CÎROC™ Ultra Premium is made from Fine French grapes, which are distilled five times, providing a crisp, clean taste and citrus nose. CÎROC™ Ultra Premium launched nationwide in January 2003. In October 2007, DIAGEO – the world’s largest spirits and beer company – made spirits history by entering into a strategic alliance with entertainment entrepreneur Sean “Diddy” Combs, in which Mr. Combs and Combs Enterprises assumed the lead on all brand management activities for CÎROC™. The infused Vodka flavors in the portfolio to date include CÎROC™ RED BERRY, CÎROC™ COCONUT, CÎROC™ PEACH, CÎROC™ PINEAPPLE, CÎROC™ APPLE, and CÎROC MANGO™ in addition to CÎROC TEN™ Vodka. The brand received a 2013 Beverage Industry News Award of Excellence, was named 2011 Spirits Brand of the Year by Market Watch, and earned a double gold medal from the San Francisco World Spirits Competition in 2010.

Combs Wine & Spirits is a privately owned, premium spirits and wine business created by Sean “Diddy” Combs in 2013. Combs Wine & Spirits is focused on delivering high impact growth driven product development strategies that promote a healthy business structure while highlighting social responsibility. The company, which is based in New York, co-owns DELEON® Tequila and is responsible for all strategic marketing for Cîroc Ultra Premium Vodka, both in partnership with Diageo.

Diageo is a global leader in beverage alcohol with an outstanding collection of brands including Johnnie Walker, Crown Royal, Bulleit and Buchanan’s whiskies, Smirnoff, Cîroc and Ketel One vodkas, Captain Morgan, Baileys, Don Julio, Tanqueray and Guinness. Diageo is listed on both the New York Stock Exchange (DEO) and the London Stock Exchange (DGE) and our products are sold in more than 180 countries around the world. For more information about Diageo, our people, our brands, and performance, visit us at www.diageo.com. Visit Diageo’s global responsible drinking resource, www.DRINKiQ.com, for information, initiatives, and ways to share best practice.