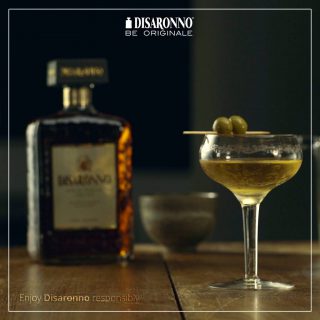 SARONNO, Italy — DISARONNO, the world’s favorite Italian liqueur, returns with a brand TV commercial to create an even stronger emotional bond with its consumers. The TV commercial will be in 30”, 20” and 15” format, distributed in the U.S.A., the U.K., Canada, the Netherlands, Germany, Belgium and Italy.

The creative concept starts with a question: what movement unleashes emotions? The “spin.” In the same way, when you spin the iconic squared top to open the bottle of Disaronno, you enter the aspirational world of DISARONNO, the original.

The commercial, filmed in an enchanting villa on Lake Como, fully portrays the unmistakable style of DISARONNO, the exceptional Italian liqueur with a contemporary, innovative personality, beloved the world over; a premium, modern brand which is always current.

The video, which is created through images and music revolving around the concept of rotation, is divided into different moments, all connected to each other with evocative images: the spectacular twist of birds in flight, the impalpable movement of a starry sky and a harmonious dance. The movement of the most compelling emotions is always a rotation, inspired by the twist of the bottle top. Therein also lies the most authentic essence of Disaronno, presented on its own, on the rocks, to highlight the premium quality of this liqueur, an icon of the Italian drinking style in the world.

The commercial, set in a dreamy atmosphere, tells the story of a dynamic brand, which has been able to innovate and renew itself over the years, to conquer the hearts and minds of consumers worldwide who have always appreciated Disaronno’s unique taste and great versatility.

Enter the world of DISARONNO…

DISARONNO is the world’s favorite Italian liqueur. Featuring an original taste and unmistakable aroma, it stands out on the world stage with distribution in more than 160 countries. The Disaronno bottle has a unique design and a cap, which lends elegance and modernity, embellished with a golden label that enhances its contemporary style. Disaronno is a pleasure to enjoy on the rocks as well as in its various mixed drinks, including the Disaronno Sour. Recognizable and versatile, it makes every cocktail one of a kind.