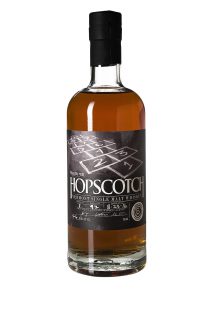 WARREN, Vt. — Mad River Distillers of Vermont is proud to announce the upcoming release of the second edition of its extremely limited Hopscotch Vermont Single Malt Whiskey on Friday, November 17 at select Vermont and Massachusetts retailers and bars. The second Hopscotch release is the result of collaboration with neighbor and family-operated microbrewery, Stone Corral Brewery.

“For our second batch of Hopscotch, we decided to distill an existing beer from Stone Corral and chose their Scotch Ale for obvious reasons,” said Alex Hilton, general manager and distiller at Mad River Distillers. “The result is a rich and malt-forward whiskey, much like the beer itself.”

Hopscotch is Vermont’s first single malt whiskey, a collaboration between Mad River Distillers and their brewer partners. For this second edition with Stone Corral Brewery, just less than 700 bottles have been produced and hand-numbered for release.

“We are excited to be working with Mad River Distillers on the Hopscotch project because we believe we share similar philosophies regarding the integrity of ingredients and construction of flavors,” said Bret Hamilton, co-founder of StoneCorral Brewery. “Our Scotch Ale was a natural starting place for us to explore crafting a single malt whiskey together. We really hope people enjoy the synergy and flavors in this unique spirit.”

– Hopscotch is a supple, flavorful whiskey that bridges the ground between the classic American whiskey style and the smoky tang of traditional Scottish single malts. It was distilled from Stone Corral Scotch Ale, which is brewed with peated malt.

– Tasting Notes: Tobacco, ale maltiness and a kiss of hop on the palate. Smoky on the finish with flavors of peat.