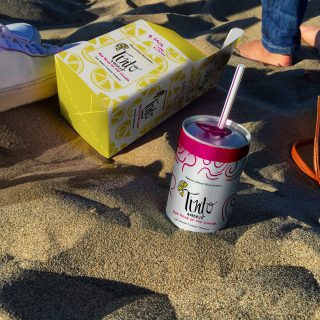 NEW YORK, N.Y. (October 20, 2017) — Tinto Amorío announced today that it is releasing its first sparkling wine cocktail – Red Wine of the Summer – with limited availability in New York and online. The brand was created in response to a shift in millennial consumption habits in the alcoholic beverage and wine categories. Their first flavor is based on a Spanish wine cocktail – Tinto de Verano – which originated in Cordoba, Spain in the early 1900s. The flavor is in a new cocktail category – sparkling wine cocktails – and features a low-calorie profile, natural ingredients, and a refreshing lemon spritz.

“We are excited to get Tinto into the hands of millennial consumers,” said Anish Patel, CEO & Founder of Tinto Amorío. “Millennials have started to shift consumption habits towards products that have an authentic story. They want more sparkling beverages, natural and low-calorie options, as well as premium products, but they also crave something that’s new, and something that they can talk about and believe in. We check all of those boxes. Tinto Amorío is as much a conversation piece and experience, as it is a phenomenal product. We aren’t just packaging wine in a can as most of the industry is trending towards. The only innovation in canned wine is in the packaging. We are introducing a brand-new cocktail category and flavor profile to consumers who are looking for novelty as well as an authentic experience.”

Tinto Amorío is committed to staying true to its Spanish wine cocktail origins as it discusses the story behind Tinto de Verano and its origins at the hands of Federico Vargas. Vargas operated an establishment, The Brilliante, where artists and bohemians found refuge on their travels through Cordoba in the early 1900s. He blended a mix of red wine with lemon soda pop for his patrons, which soon came to be known as: “Tinto de Verano” or Red Wine of the Summer. A legacy began at The Brilliante that spread like wildfire through Spain, and made Tinto de Verano into a household name.

Anish was first introduced to Tinto de Verano and other Spanish wine cocktails while in Cádiz, Spain, and knew they were the perfect response to shifting millennial consumptions habits back home in the states. A true labor of love, Tinto Amorío took seven months and countless iterations to formulate their Red Wine of the Summer. They were passionate about making sure it tasted perfect and that it wasn’t just another commercially viable wine product, but one that was true to its roots. Red Wine of the Summer is translated from “Tinto de Verano” however the semi-sweet taste profile of this sparkling red wine cocktail is a perfect blend to be enjoyed year-round.

“The flavor profile is complex enough that it draws you in and captures your attention, but it is also simple enough that you can distinguish the lemon and citrus hints,” said Anish. “It’s not another summer party drink; it’s a finely crafted wine cocktail and is meant to be enjoyed and appreciated for its intricacies.”

Tinto Amorío also has a commitment to social responsibility and is donating a portion of every sale directly to causes in the community. Each production run is dedicated to a new cause with their 2017 run being dedicated to the Children’s Hospital of LA.

Red Wine of the Summer is available in 4-packs for a suggested retail price of $20. Tinto’s first cocktail is 110 calories, made with Natural Ingredients, and with No Artificial Flavors, Sweeteners, or Preservatives. It’s also Gluten Free.

To find Tinto near you, or to order online, visit https://drinktinto.com/buy-tinto/.