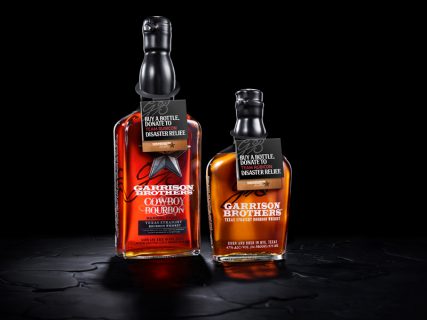 HYE, Texas — One of Garrison Brothers’ latest initiatives is an ongoing partnership with Team Rubicon, a global disaster response organization that unites the skills and experiences of military veterans with first responders to deploy emergency response teams. By providing military veterans an avenue to regain a sense of purpose, community, and identity through disaster response, the organization also helps reintegrate veterans back into civilian life. The partnership began in August of 2017 when Hurricane Harvey hit the Texas coast.

“We were watching the news, like everybody else, and we saw the devastation in Port Aransas, TX,” said Rob Cordes, Head Marketing Dude at Garrison Brothers Distillery. “One of the shots was a longtime customer of ours, Spanky’s Liquors, and in the footage of this liquor store, on the news, we could actually see bottles of spirits broken and floating in the flood waters. The folks at the distillery decided that they wanted to do something. We came up with a plan to donate all bourbon that was distilled and barreled that day. We called it “Operation Hurricane Tough” and created a donation website and a special vintage bourbon release called Hurricane Tough. We picked a charity that could help, and do a better job than we could, Team Rubicon. In just a few days, we raised $146,000 for them.”

Hurricane Florence, one of the worst storms to hit the southeast United States in recent memory, made landfall last week. The natural disaster has devastated families and businesses throughout the Carolinas, Virginia, and Georgia.

To support those affected by Hurricane Harvey and Florence, Garrison Brothers is continuing their work with Team Rubicon in conjunction with 2 new bourbon releases scheduled for the fall. The distillery will donate $1 for every bottle of Boot Flask Bourbon and $5 for every bottle of Cowboy Bourbon sold between now and Team Rubicon’s Salute to Service Awards Gala on Thursday, November 1.

Every expression of Garrison Brothers bourbon is made from a sweet mash bill and barrel aged in the intensely hot Texas climate. The extreme heat leads to exponential aging seasons in every year, resulting in a darker, richer, and fuller bourbon; bolder than almost any other bourbon on the market.

At the American Craft Spirit Awards in 2018, they were awarded a gold medal for their Single Barrel Bourbon, silver medal for their 2016 Vintage Small Batch Straight Bourbon Whiskey and another silver for their Balmorhea Double Barrel Bourbon Whiskey. Jim Murray’s Whiskey Bible named Garrison Brothers Cowboy Bourbon™ “The American Micro Whiskey of the Year” in 2014 and again in 2017. Last year, the distillery was voted the Best Craft Whiskey Distillery in America by readers of USA Today.

The business is a proud and active member of the communities of Blanco, Fredericksburg, Hye, Johnson City, and Stonewall. The distillery and its barrel barns are open to the public for tours in Hye, Texas. Anyone interested in learning more about Garrison Brothers bourbon or tours of the distillery should visit garrisonbros.com or follow @garrisonbros on Facebook, Twitter, and Instagram.