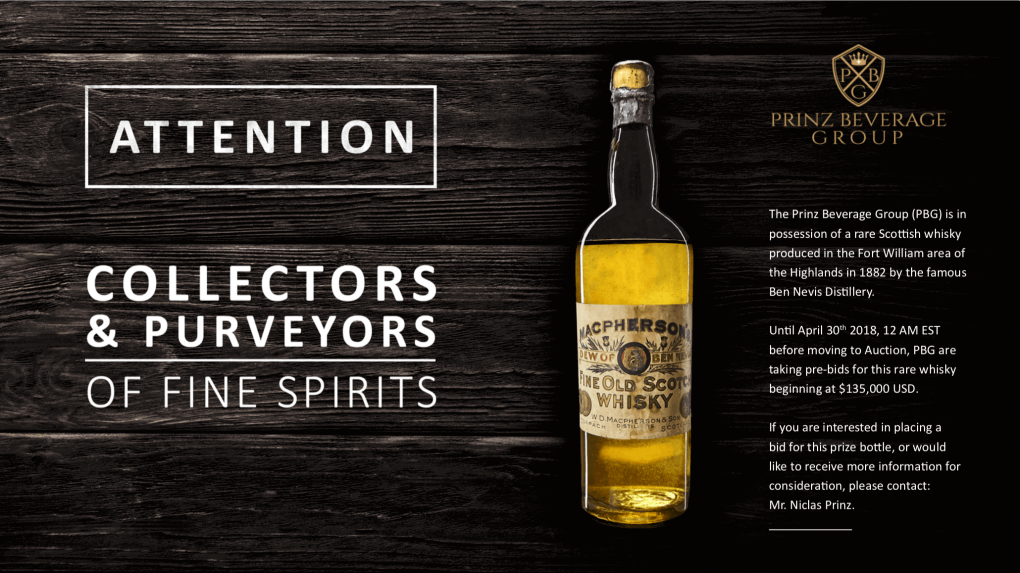 Toronto, Canada — The Prinz Beverage Group (PBG), a Global Beverage Alcohol Company based in Toronto and Hong Kong, announced today it will be accepting bids by email beginning at $135,000 USD for a bottle of 150-year- old Scottish Whisky it has in its possession. Bids will be accepted until 12AM EST, April 30, 2018.

Produced in the Fort William area of the Scottish Highlands by the Ben Nevis Distillery, this bottle of Scottish Single Malt whisky is determined to have been produced in and around the mid 1800’s.

The Whisky is labelled “Dew of Ben Nevis” and is made from a recipe developed by the distillery’s founder John McDonald. McDonald’s renowned Scottish Single Malt became highly popularized during this period. In fact, “Long John” McDonald’s “Dew” received such wide acclaim that the distillery was visited by Queen Victoria and her son, The Prince of Wales, in 1848.

The bottle remains completely intact with the original cork, label and capsule embossed with Queen Victoria’s Crown, and is currently held in Toronto.

“We are thrilled to be able to share this piece of history with the world. The Ben Nevis Distillery is one of the oldest licensed distilleries in Scotland and anyone who obtains this rare bottle will memorialize their fine spirit tradition,” said Mr. Niclas Prinz, President of PBG.

Anyone interested in submitting a bid is asked to contact the Prinz Beverage Company by email at whisky@prinzbev.com.