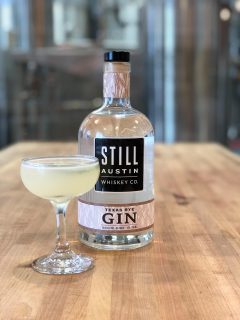 Austin, Texas – Austin’s first urban whiskey distillery, Still Austin Whiskey Co., opened its doors to the public in September 2017 with a steadfast commitment to a fully grain-to-glass approach. With a mission to produce authentically-crafted whiskeys using all Texas-grown grains, Still Austin has achieved a considerable amount in just one year, including a strong launch, four products on shelves and an unprecedented amount of product in barrels.

Still Austin broke new ground when they opened the first whiskey distillery within the Austin city limits. Once open, they hit the ground running, and on July 20, 2018, filled their 1,000th whiskey barrel. For a craft distillery, this is a considerable accomplishment.

“It was a great feeling to fill that 1,000th barrel,” said co-founder and CEO Chris Seals. “To my knowledge, no other craft distillery has gone from zero to 1,000 this quickly. We’re very proud of Still’s entire team and all we’ve accomplished this year.” Still Austin’s production is led by Head Distiller, John Schrepel, who distills on their 42-foot column still custom designed by Master Distiller Mike Delevante and crafted by Forsyths in Scotland.

In addition to production milestones, the distillery has achieved a great amount in one year, including a warm reception of initial product offerings; all have won medals in craft competitions. In June 2018, Still Austin released their Texas Rye Gin, a bold iteration made from a base spirit of local rye grains – the first of its kind in Texas. In August, Austin Monthly Magazine named Still “Best Whiskey Distillery” in their “Best of ATX 2018” issue.

There is a great deal on the horizon for Still Austin. As demonstrated by their production, barreling has been a consistent focus and the anticipation for aged product is high. Still Austin hopes to release the first of its aged products, a high Rye Bourbon, in the upcoming months.