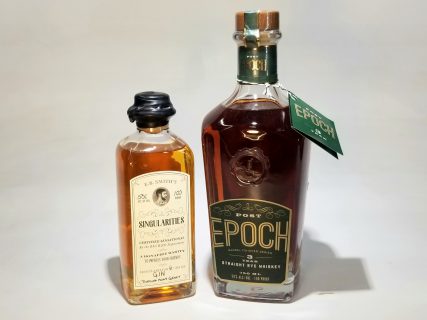 BALTIMORE, MD – Baltimore Spirits Company today announced they will be re-releasing their award-winning Maple Syrup Post Epoch Rye Whiskey and a collaborative gin produced in conjunction with Frederick’s McClintock Distilling. Originally released in 2019, this will be the first time either spirit has been sold since and will be available this Friday starting at noon, keeping BSC’s yearly tradition of releasing a spirit on Black Friday.

The Maple Syrup Post Epoch Rye has been aged for three years and spent the last 11 months finishing in a special oak barrel that first held bourbon and was then used to age maple syrup creating an especially smooth whiskey with a sweet maple syrup finish. This version of Post Epoch was the recipient of a Double Gold medal at the San Francisco World Spirits Competition in 2019, which is reserved for spirits that win a unanimous gold medal rating from the judges. This is the first of the specially-produced Post Epoch line of whiskeys to receive a re-release.

The gin produced with McClintock Distilling is part of BSC’s Singularities line of limited-edition spirits. A Genever-style gin in the traditional Dutch fashion, this unique expression is made using mash from McClintock’s Bootjack Rye Whiskey – the same mash used in the previous distillation – and has been aged for 18 months, making this a more robust expression. While traditional Genever is made using malted barley, this product uses the spicier and more peppery rye base, creating an especially flavorful gin.

“These two products were incredibly popular with our customers, and they’ve regularly asked for us to release more of them,” said Baltimore Spirits Company co-founder and CEO Max Lents. “We’re happy to be able to oblige.”

Maple Syrup Post Epoch Rye ($59.99) and Singularities Genever-style Gin ($29.99) will be available on a first-come-first-serve basis this Friday through BSC’s tasting room, for curbside pickup, or via delivery through their website.

McClintock Distilling, an organic craft distillery located in Frederick, Maryland, offers vodka, gins, and whiskeys. McClintock Distilling strives to maintain a sustainable and locally sourced business with a focus on product quality, environmental impact, and community betterment. McClintock Distilling is committed to bringing the McClintock experience to all of our customers through every drop. For more information please visit mcclintockdistilling.com.