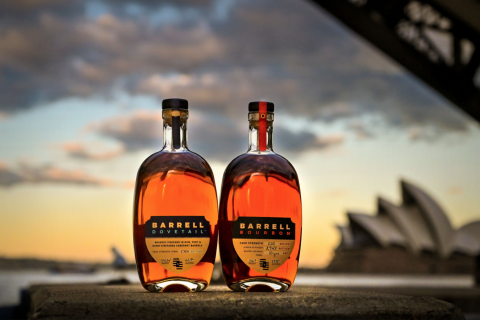 Louisville, Ky. – Barrell Craft Spirits (BCS) today announced that its award-winning portfolio, which is currently sold in 45 US states and online will expand distribution into Australia, the company’s first direct export outside of the US. The brand will be distributed via Orrsum Spirits, an importer, marketer, retailer and distributor of premium spirits focused on providing the Australian whiskey community, including clubs like Whiskey Hunt Australia, access to sought after bourbon, whiskey and rye. Australians will initially have access to the following Barrell Craft Spirits selections: Bourbon Batches 013, 020, 023, 024, BCS Bourbon, BCS Rum, Rye Batch 003, Dovetail American Whiskey and the Infinite Barrel Project.

“I’ve been a big fan of Barrell Craft Spirits for some time now,” said John M. Weifert, Director, Orrsum Spirits. “The care and commitment to quality Joe Beatrice and his team put into each unique release is inspiring. We’re honoured to bring these incredible award-winning spirits to the Australian whiskey community.”

“We entertained the idea of expanding distribution outside of the US for years, but needed to ensure we could supply and support our current partners,” said Joe Beatrice, Barrell Craft Spiritsfounder. “Now, we’re in a solid position to move forward and have been highly encouraged by Australians’ passion for American Whiskey.”

Founded in 2013 in Louisville, Kentucky, Barrell Craft Spirits is an award-winning independent blender and bottler that has created a unique niche within the spirits industry by focusing on the art of sourcing and blending. Rather than follow a traditional path and build his own distillery, Joe drew inspiration from Scotland’s long-established independent bottlers who elevated barrels of whisky into something greater than the sum of their parts. With the goal to become the most creative, forward-thinking, and progressive whiskey blenders in the nation, BCS selects and blends a variety of spirits, including whiskey, bourbon, rye and rum, and bottles them at cask strength. As part of the process, the team sources ingredients from all around the world and explores different distillation methods, barrels and aging environments. Every batch is produced as a limited release and has a distinct flavor profile.

Joe remains intimately involved with every step of the production process, using his exceptional palate to choose and create great spirits. He works alongside Chief Whiskey Scientist and Director of Distillery Operations Tripp Stimson, who joined BCS in 2017 after having spent nine years with Brown Forman Corporation, headquarters to Jack Daniel’s, Woodford Reserve and Old Forrester.

Joe, Tripp and the BCS team were thrilled to take top honors this year at arguably the two most prestigious US spirits competitions. At the 2020 San Francisco World Spirits Competition, Dovetail American Whiskey was awarded the “Chairman’s Trophy” and top score (97/100) inthe American whisk(e)y category, while Barrell Bourbon Batch 021 won Double Gold and was named Best Bourbon and Best Small Batch Bourbon – both overall and within the 6-10 year category– at the Ultimate Spirits Challenge. BCS has also been consistently highly rated by Whisky Advocate and named “Best American Whiskey of 2018” in Forbes by whiskey authority Fred Minnick.

Barrell Craft Spirits is an independent blender and bottler of unique aged, cask-strength sourced whiskey and rum spirits, that is recognized for its blending expertise. The company selects and blends products that explore different distillation methods, barrels and aging environments, and bottles them at cask strength. Every batch is produced as a limited release and has a distinct flavor profile.