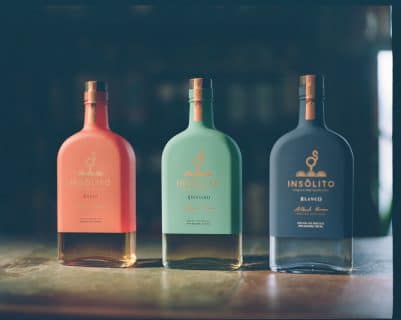 AUSTIN, Texas– INSÓLITO, the new super-premium tequila, which is backed by Critically-Acclaimed Country band Midland and made using a unique process of crafting small batch tequila, has launched three expressions in the band’s home state of Texas. The collaboration marries the unconventional personality of the Double Grammy nominees, with brothers Octavio & Alberto Herrera, who own and operate Premium de Jalisco, the highest distillery in México; and Spirits Innovation Partners (SIP), the operating arm of the business.

INSÓLITO, which translates to “rare,” “uncommon,” and “extraordinary,” is distilled at 7,200 feet above sea level in the mountains of Jalisco within a town called Mazamitla. The high altitude and cooler temperatures provide for a slow, natural aging process, resulting in more complex flavors. The brand chose to use only new American White Oak barrels so that during the aging process, the 100% Blue Agave spirit would mingle with the barrels’ richness and hints of natural caramel and vanilla. Similar to the bourbon aging process, the temperature fluctuation allows the tequila to travel into and out of the barrel wood at a higher rate.

Midland was formed in 2013 after three old friends rekindled at Cameron Duddy’s wedding in Wyoming. Now, the trio all call Texas home. They recently released their sophomore album “Let it Roll,” their No. 1 Billboard Top Country Album debut and second critically lauded project. The trio are self-proclaimed tequila aficionados, former bartenders and INSÓLITO brand owners. Rooted in tradition in both sound and style, the retro-facing band comprised of Mark Wystrach (lead vocals); Cameron Duddy (bass guitar, vocals); and Jess Carson (lead guitar, vocals) have been praised as “Connoisseurs of Country Craft” by NPR and cited for their “retro country elegance” by The New York Times. They are represented by Matt Graham of BRND MGMT, Jason Owen and Todd Ramey of Sandbox Entertainment as well as Creative Artists Agency (CAA), all partners in the project.

“We’re thrilled to launch INSÓLITO first in our home state of Texas,” said Wystrach. “We created INSÓLITO as an extension of our brand and we’re proud of what we’ve created in partnership with SIP.”

The ACM Award-winning trio has earned a reputation as a wildly satisfying live act and later this month will make a return to their home state with their ROAD TO THE RODEO TOUR. Introducing fans exclusively to INSÓLITO at their shows, the tour will venture across the Lone Star State and include the band kicking off opening night of the prestigious Houston Livestock Show & Rodeo as well as two nights at Billy Bob’s Texas. The Billy Bob’s dates mark a special homecoming for the Dripping Springs-based trio who have already sold out the venue twice and filmed the music video for hit single “Burn Out” in the legendary haunt.

“Our goal was to produce a tequila that stands for uncompromising character, including the liquid, personality and partners,” said Pete Kelly, CEO, INSÓLITO. “After two and a half years of development, I believe INSÓLITO delivers on all three of those fronts.”

At 80 proof (40% ABV), INSÓLITO is a complex and smooth super-premium tequila.

The brand’s hand-crafted bottles of Blanco, Reposado and Añejo each feature a distinct color (INSÓLITO Blue, Sea Foam Green and Coral, respectively) painted three-quarters of the way down. Designed by SIP, the lower exposed tequila is the party where tequila lovers come together to celebrate those who live boldly, bravely and beyond convention.

INSÓLITO is now available in 750ml bottles in select on- and off-premise accounts throughout Texas and will be distributed by Ben E. Keith Beverages.

possesses the necessary balance of authenticity, quality and personality, and are confident

it will resonate with both tequila and music fans alike.  We are eager to bring INSÓLITO to the market and look forward to building this brand with our new partners at SIP.”

INSÓLITO, which translates to “rare,” “uncommon,” and “extraordinary,”is a super-premium tequila made from 100% blue agave. It’s distilled 7,200 feet above sea level in the mountains of Jalisco, México, which produces flavor second to none. The company’s product line includes three expressions: Blanco, Reposado and Añejo. The new brand is a collaboration among brothers Octavio & Alberto Herrera; Midland, the acclaimed American country music group; and Spirits Innovation Partners.