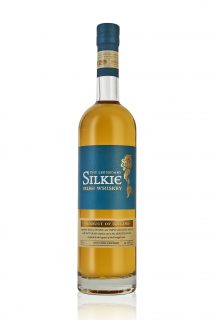 From the rugged coasts of Donegal in Ireland’s northwest, Sliabh Liag Distillers have bridged the Atlantic and 200 years of history with the arrival of their award-winning spirits in the United States. Sliabh Liag Distillers (pronounced Sleeve League and meaning mountain of flagstones) have appointed Preiss Imports as importer for their premium spirits brands, The Legendary Silkie Irish Whiskey, The Legendary Dark Silkie Irish Whiskey and An Dúlamán Irish Maritime Gin. It marks the first time in almost two centuries that a shipment of liquor has left the rural county of Donegal for the shores of the United States.

Located on Ireland’s Wild Atlantic Way, Sliabh Liag Distillers have set out to reclaim the distilling heritage of Donegal, by producing premium brands that are deeply rooted in the rich history and folklore of the breath-taking Donegal Coast.  The Company released their blended whiskey, The Silkie Irish Whiskey, in 2016. In 2017, Sliabh Liag Distillers then brought legal distillation back to Donegal with the release of their gin, An Dúlamán Irish Maritime Gin. In 2020, company founders, James Doherty and his wife and head-distiller Moira, released The Legendary Dark Silkie Irish Whiskey. Dark Silkie has been heralded as a triumph in the Irish Whiskey community, a blend of double distilled single malt and triple distilled peated single malt with soft grain whiskey, Dark Silkie captures the sweet smoky flavours of the whiskeys produced in Donegal in years gone by. Often thought of a Scottish style of whiskey, peated Irish Whiskey was almost lost during a period of distillery closures and industrialisation in the early 20th century, Sliabh Liag Distillers aim to resurrect this beautiful style of whiskey, and Dark Silkie is their first step.

The launch of Silkie and Dark Silkie in the US comes at an historic time for Sliabh Liag Distillers, as they have just completed the first legal whiskey distillation in Donegal in close to 200 years, filling the first cask of a double distilled smoky spirit made from Irish peated malt into a first-fill bourbon oak cask, where it will mature for a minimum of five years. It is the first time since the closure of Burt Distillery in 1841 that legal whiskey distillation has taken place in Ireland’s most northerly county. While all distillation and bottling currently takes place at their facility in the village of Carrick, construction has begun on a new €6.5m distillery in nearby Ardara, where they will produce up to 400,000 liters of alcohol per year, roughly 1.3 million bottles of whiskey, gin and vodka.

Company founders and managing directors, James and Moira Doherty are well on their way to realizing their dream of reigniting the county’s distilling heritage: “While Burt Distillery ceased production in 1841” James said “We know illicit distilling continued during the intervening years, not least by my grandfather who was creating a smoky, double distilled spirit under the authorities’ radar on the hills of Kilcar. I think my grandfather would approve that we are now distilling innovative, award-winning spirits and shipping them to the US for our American friends to enjoy.”

“We are really excited to be working with Preiss Imports to help build Sliabh Liag Distillers profile throughout the United States. Donegal was once a proud centre of distilling and we are working hard to bring the tradition of distilling back to the county. With such a proven track record, Henry Preiss and his team are the ideal partners to help us share our craft and innovation with the world.” James added.

Henry Preiss of Preiss Imports says the addition of the Sliabh Liag Distillers’ brands to their portfolio will give their customers the opportunity to list cutting-edge premium Irish spirits in the US: “We’re delighted to be working with Sliabh Liag Distillers, helping to bring their award-winning spirits – Silkie Irish Whiskey, Dark Silkie and An Dúlamán Irish Maritime Gin – to the widest possible audience in the US. It’s important to us that we are able to share the very best international brands with our customers – innovative and exciting premium spirits from independent, family run companies – these expressions from Sliabh Liag Distillers offer exactly that.”

Silkie Irish Whiskey has been blended to be exceptionally soft, with a fresh, yet rich character and elegant finish with notes of green apple, orange zest and stem ginger. Dark Silkie Irish Whiskey has at its core a peated, triple distilled single malt, giving hints of salted caramel, dark chocolate, oak and pipe tobacco finishing with a leathery, spicy smoke. Both whiskeys are bottled at 46% ABV (92 proof) and are non-chill filtered, for a character as rich as the folklore that inspired them.  An Dúlamán Irish Maritime Gin has been described as “A love letter to the Donegal Coast”, with gentle salty undertones, umami and bright juniper, its signature softness works in harmony with complexity of the seaweed flavors, making it an absolute must for seafood pairings and mixology.