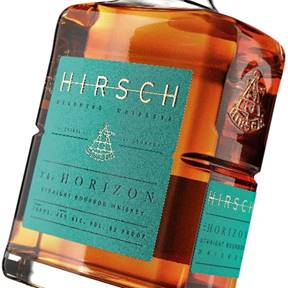 SAN FRANCISCO – In 1974, when A.H. HIRSCH first imagined his now legendary bourbon, he set the gold standard for thoughtful American whiskey. Today, Hotaling & Co., the San Francisco-based leading importer and distiller of super-premium artisanal spirits, reintroduces HIRSCH Selected Whiskeys, offering a new expression of this iconic whiskey brand with the release of the first selection, THE HORIZON Straight Bourbon Whiskey (46% ABV, $39.99 SRP). This first expression reflects the brand’s philosophy of curating the best in American whiskey and celebrates “The Spirit of the Journey.” HIRSCH will continue to release new expressions in 2021, as the brand invites whiskey drinkers to follow along and discover that the journey is the reward.

THE HORIZON combines two straight bourbons distilled in Lawrenceburg, IN, and is intended to invite whiskey enthusiasts to navigate the landscape of bourbon. Each bottle of THE HORIZON, which is 92 proof, provides the exact batch specifications on the rear label, for the bourbon enthusiast who seeks that level of detail. The inaugural batch, AHH0320, is made up of two components: 94% of the blend is distilled from a traditional mash bill of 75% corn, 21% rye, 4% malted barley aged  5 years and 4 months; the remaining 6% is distilled from a high-rye mash aged 6 years and 2 months for added complexity.

On the nose, THE HORIZON offers a classic bourbon profile with sweet cornbread and vanilla. The palate is balanced with warm notes of cinnamon and oak, followed by a long finish with slight lingering sweetness. The whiskey is approachable neat and on the rocks, enjoyable for both casual whiskey drinkers and enthusiasts alike.

To convey the new HIRSCH Selected Whiskeys’ sense of adventure and discovery, award-winning packaging and branding design company Stranger & Stranger incorporated the image of a sextant into the brand’s logo to communicate the Spirit of the Journey. The flask-shaped bottle features a wooden-top cork stopper with compass marks, while the label features a color scheme that evokes nautical maps and other visual references to travel and exploration. The base of the bottle hides a message for the curious: “No Stone Left Unturned.”

“Hotaling & Co. takes great pride in its ownership of the HIRSCH brand,” says Dan Leese, President and CEO of Hotaling & Co., which boasts one of the most extensive collections of artisanal world whiskies. “With this reintroduction, we invite people to take a journey into the world of bourbon and discover what makes HIRSCH legendary. THE HORIZON takes the first step into the future of HIRSCH, with additional expressions planned to round out the collection.”

The story of American whiskey is not complete without mention of A.H. Hirsch Reserve 16 Year Old, widely considered the best American bourbon ever produced – even inspiring revered whiskey expert Chuck Cowdery to write the book,The Best Bourbon You’ll Never Taste. The True Story of A. H. Hirsch Reserve Straight Bourbon Whiskey, Distilled in the Spring of 1974. A.H. Hirsch was an investment banker who invested in the Schaefferstown Distillery, an historic landmark for American whiskey in operation for more than two centuries.

Hotaling & Co., the leading San Francisco importer & distiller, offers the finest curated portfolio of premium artisanal spirits including Luxardo Liqueurs, Nikka Whisky, No.3 Gin, Kavalan Whisky, Lot 40 Whisky, HINE Cognac, Denizen Rum, and HIRSCH Selected Whiskeys. Hotaling & Co., originally named Anchor Distilling Company, was established in 1993 and is credited with releasing America’s first craft whiskey (Old Potrero) and American craft gin (Junípero Gin) after Prohibition. In 2010, Anchor Distilling Company was sold to a business partnership that included Tony Foglio and London’s oldest wine and spirit merchant, Berry Bros. & Rudd and began expanding to incorporate a collection of super-premium artisanal spirits imported from around the world. In 2017, Anchor Distilling became Hotaling & Co. The new name is a nod to one of Anchor Distilling’s most beloved small batch whiskies (Old Potrero Hotaling’s Whiskey) and to the San Francisco legend A.P. Hotaling, who came out West during the Gold Rush and quickly became one of the most reputable spirits dealers in the country. Today, Hotaling & Co. celebrates exciting growth and achievements; marking its 26th year of distilling and its 10th year of commercially uniting artisan distillers from around the world and sharing their stories to discerning consumers. HotalingandCo.com