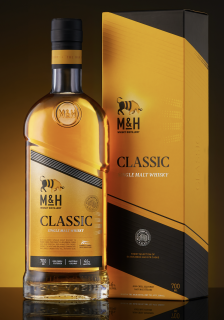 The distillery has partnered with leading distributor ImpEx Beverages, to provide its collection of award-winning kosher spirits to American consumers. The M&H Collection will introduce liquor enthusiasts to the Classic Single Malt Whisky, the Elements Sherry Whisky and the Levantine Gin and will be sold in more than 20 states coast-to-coast, including New York, Massachusetts, Florida, Illinois, California and Washington.  “ImpEx is thrilled to offer the innovative collection of spirits by M&H Distillery. We are confident that M&H Distillery’s unique style derived from the hot climate maturation, distillation techniques, and the soul put into each bottle will win the hearts of the American consumer” says Sam Filmus, President of ImpEx Beverages.

M&H Distillery’s spirits are currently available in several global markets and have been met with much fanfare. Consumers can purchase the collection in the United Kingdom, France, Belgium, The Netherlands, Austria, Germany, Spain, Denmark and Australia. The second half of 2020 will mark M&H Distillery’s debut in new territories including North America (U.S. + Canada), South Africa, and Norway.

In Tel Aviv’s hot & humid, Mediterranean climate, whisky matures and extracts barrel flavor faster than in traditional whisky-producing countries, giving the whisky the characteristics of a much mature whisky. M&H Distillery’s Classic Single Malt Whisky has been matured in the finest ex-bourbon and special red-wine STR casks, giving it a light and balanced character with notes of vanilla and light oak, alongside subtle notes of black pepper.

M&H Distillery is already producing its next series, the “Elements Series,” through which the distillery will present different characteristics of its single malt whisky. Each of the three M&H Distillery “Elements” bottlings will have a different cask element that enhances the whisky to a new level of flavor: sherry casks, peated casks, and ex-red wine casks from Israel’s top winery. M&H Distillery Elements Sherry will be the first ever single malt whisky that was matured in Kosher sherry casks, and is set to launch the series in the U.S. this August. As explained by Eitan Attir, CEO of M&H Distillery: “M&H Distillery fills approximately 800 barrels a year (approximately 170,000 litres of New Make Spirit), so by 2021, the distillery will be producing over a quarter of a million bottles around the world. We work vigorously and plan years in advance to offer the world a new single malt whisky from Tel Aviv. “We are honored and excited to start our US journey, and we look forward to meeting the American consumer and introducing them to our quality spirits.” For more information, please visit mh-distillery.com.

M&H Distillery (Milk & Honey), established by entrepreneur and investor Gal Kalkstein, is Israel’s first whisky distillery, and produces high quality distillates. All raw materials, equipment, casks and processes were selected to ensure that the final product – whether white distillates or aged whisky – meets the highest quality standards. M&H Distillery received guidance and advice from Dr. Jim Swan, a world-renowned master distiller. All the products of the distillery are kosher.

Founded by Sam Filmus in 2008, ImpEx is an acclaimed U.S. importer of fine spirits with unique flavor profiles and works with some of the world’s most prestigious global brands such as Kilchoman, Penderyn, The GlenAllachie, Port Askaig, Single Malts of Scotland, and Japanese Distilleries Ohishi, Fukano, & Kurayoshi. ImpEx manages all aspects and steps of the importation process for its niche product lines.