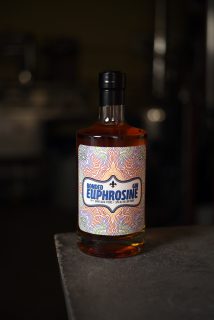 About Bottled In Bond Gin To qualify as Bottled in Bond, the spirit must be aged a minimum of four years and bottled at 100 proof (50% ABV).

Until recently, Federal regulations required that for gin to qualify as bottled in bond, it would have to be stored for four years in barrels lined with wax, to prevent any influence of the wood on the spirit.

Furthermore, regulations forbade the use of the term “aged” in relation to gin. This curious rule resulted in barrel aged gins, such as Atelier Vie’s Euphrosine Gin #9 Barrel-Finished Reserve, having to resort to euphemisms rather than accurate description.

Labeling Regulations Changed However, after well over a year of draft rulemaking, public comment, and further consideration, the Federal Alcohol and Tobacco Tax and Trade Bureau (TTB) recently modernized a variety of spirits labeling regulations. Among these changes, TTB made some sensible changes in relation to gin. As of May 4, 2020, TTB now permits distillers to describe barrel aged gin as “aged” and now also allows for bottled in bond gin to be aged in unlined oak barrels.

A Fortunate Coincidence This is the moment where this recent change in the rules meets with a fortunate coincidence.

“Back in 2016, we had some extra gin and some empty barrels at the distillery,” explains Jedd Haas, President of Atelier Vie. “Our standard barrel aged gin, Euphrosine Gin #9 Barrel-Finished Reserve, is aged for nine months. We had previously experimented with a batch that was aged for thirteen months, but the results lacked a good balance of flavors and the spirit was unusable. So with no expectations, and simply as an experiment, we filled two barrels with new make gin and put the barrels aside. These barrels sat in the distillery for years, nearly forgotten, with no end use in mind. The modernization of the labeling regulations for bottled in bond gin was both unexpected and fortuitous. The end result is that through this rule change, our experiment could suddenly became a real product. This turn of events left only the most important question to consider. Was it any good? As you’ll recall, our earlier experiment with aging gin for thirteen months was a failure, so we had only a small amount of optimism prior to opening the barrels. But in this case, we had a pleasant surprise. After four years, the spirit has been transformed with incredible notes of oak and smoke. This is a whisky lover’s gin and it’s delicious,” Haas concluded.

Spirit Details Euphrosine Gin #9 Bottled in Bond has been barrel aged a minimum of four years and is bottled in 750ml at 100 proof (50% ABV). The retail price at the distillery is $65, which includes all of our notoriously high sales taxes. Euphrosine Gin #9 Bottled in Bond is also in stock for wholesale purchase from our Louisiana distributor, International Wine and Spirits. A total of 204 bottles were produced.

Distillery Purchases via Online Store Due to the ongoing public health emergency, the distillery is not open to the public for tours and tastings at this time. However, all spirits can be purchased for curbside pickup through our new online store. Visit https://atelier-vie-llc.square.site to place your order online and complete the purchase. Orders are typically ready for pickup the following morning between 9am and 10am. Depending on our production schedule, an alternate pickup time may be arranged. More details are on our site, ateliervie.com.