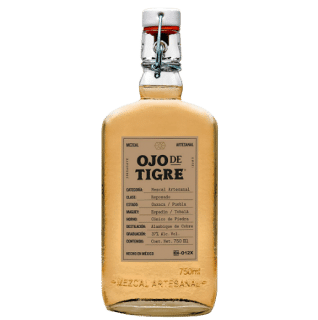 PARIS — Pernod Ricard proudly announces its collaboration with super premium mezcal brand Ojo de Tigre, a traditional Mexican spirit. Ojo de Tigre is a small-batch, artisanal mezcal crafted according to ancient traditions. Only sustainable agave from the Tobala and Espadín plants are used, creating a smooth, sweet and herbal taste profile that can be savoured neat or in cocktails. Ojo de Tigre is available in both Joven and Reposado varieties and is presented in a unique and iconic bottle.

The premium plus mezcal category is enjoying strong growth, capturing fans among mixologists and consumers. Ojo de Tigre strengthens Pernod Ricard’s presence in mezcal, following the Group’s entry into the category in 2017 with a majority stake in Del Maguey Single Village Mezcal.

This collaboration is Pernod Ricard’s latest in a series of successful partnerships with brands launched by passionate entrepreneurs. The Group is excited to include among them Moises Guindi, Co-founder of Ojo de Tigre and Co-founder & Chief Executive Officer of Casa Lumbre.

Moises Guindi stated, “We believe the next stage of our beloved category is one that actively invites more drinkers and expands the occasions and uses for mezcal. This expansion will recruit the next generation of drinkers and guide more mezcal lovers through the category and into our super premium brands. We believe Ojo de Tigre is well suited to this task and Pernod Ricard is the perfect partner for this mission.”

Pernod Ricard is the No.2 worldwide producer of wines and spirits with consolidated sales of €9,182 million in FY19. Created in 1975 by the merger of Ricard and Pernod, the Group has developed through organic growth and acquisitions: Seagram (2001), Allied Domecq (2005) and Vin&Sprit (2008). Pernod Ricard, which owns 16 of the Top 100 Spirits Brands, holds one of the most prestigious and comprehensive brand portfolios in the industry, including: Absolut Vodka, Ricard pastis, Ballantine’s, Chivas Regal, Royal Salute, and The Glenlivet Scotch whiskies, Jameson Irish whiskey, Martell cognac, Havana Club rum, Beefeater gin, Malibu liqueur, Mumm and Perrier-Jouët champagnes, as well Jacob’s Creek, Brancott Estate, Campo Viejo, and Kenwood wines. Pernod Ricard’s brands are distributed across over 160 markets, and by its own direct salesforce in 73 markets. The Group’s decentralised organisation empowers its 19,000 employees to be true on-the-ground ambassadors of its vision of “Créateurs de Convivialité.” As reaffirmed by the Group’s three-year strategic plan, “Transform and Accelerate,” deployed in 2018, Pernod Ricard’s strategy focuses on investing in long-term, profitable growth for all stakeholders. The Group remains true to its three founding values: entrepreneurial spirit, mutual trust, and a strong sense of ethics. As illustrated by the 2030 roadmap supporting the United Nations Sustainable Development Goals (SDGs), “We bring good times from a good place.” In recognition of Pernod Ricard’s strong commitment to sustainable development and responsible consumption, it has received a Gold rating from Ecovadis and is ranked No. 1 in Vigeo Eiris for the beverage sector. Pernod Ricard is also a United Nation’s Global Compact LEAD company. Pernod Ricard is listed on Euronext (Ticker: RI; ISIN Code: FR0000120693) and is part of the CAC 40 index.

Casa Lumbre Group is a parent company dedicated to craft “farm-to-bottle” Mexican premium spirit propositions with sensorial uniqueness. The group has a strong focus on place of origin, sustainability, and original method of productions. Casa Lumbre has created brands such as: Ancho Reyes Liqueur, Montelobos Mezcal, Abasolo Whisky and Nixta Corn Liqueur. Ojo de Tigre Mezcal S.A.P.I. de C.V., is an independent Mexican company established in 2018 with the objective to create a 100% handmade, small-batch, artisanal mezcal crafted according to ancient traditions. Only sustainable agave from the Tobalá and Espadín plants are used, creating a smooth, sweet and herbal taste profile that can be savored neat or in cocktails. Ojo de Tigre is available in both Joven and Reposado varieties.