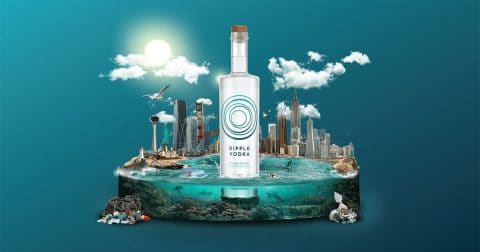 Jersey City, N.J. — New Jersey-based RIPPLE VODKA has launched a crowdfunding campaign on Indiegogo July 2nd as a means of becoming the world’s most environmentally-oriented and socially conscious vodka brand. It is seeking to raise $48,000 from the crowdfund.

Founded in 2019 by expats Jon Dunnington and Anthony Packwood, Ripple Vodka is a new ultra-premium vodka that is reinventing how the world drinks, one drink at a time. Addressing the serious lack of sustainability initiatives in the alcohol industry, each bottle of Ripple Vodka purchased goes towards cleaning the world’s oceans by removing harmful plastics. Working towards creating new industry standards and ending damaging cycles, Ripple Vodka is dedicated to disrupting a $27+ billion industry by making some of the best tasting vodka while also leaving the world better off through sustainability initiatives that provide lasting positive change.

The company is offering a host of rewards for different levels of pledge, including exclusive Ripple Vodka merchandise, personalized bottles, name recognition on the Ripple Vodka office ‘Wall of Legends’, and even lifetime discounts.

The money raised will bolster the company’s first major run of 5,000 bottles of ultra-premium, American-made, gluten-free vodka and go-to-market strategy, in addition to much-needed practicalities such as federal taxes, Indiegogo fees, processing fees, and licenses to sell liquor in 6 additional states. These crowdfunding efforts come at a pivotal time for the sustainability-oriented brand, priming it for significant growth in a $6.6 billion vodka industry and a $27 billion dollar spirits market where there is a growing demand for alternative options that stand for environmental causes and foster tangible change for the betterment of the world.

Until now, the idea of a vodka brand helping the planet environmentally has been relatively unheard of. Providing a simple solution to drinking for a worthy cause, Ripple Vodka stands out by streamlining an environmentally beneficial process with its innovative RIPPLE EFFECT initiative that removes 18 plastic bottles from the ocean for every 750ML bottle of Ripple Vodka purchased. Spurred on by an unshakeable fear that global recycling efforts aren’t enough, Ripple Vodka took a resounding stand, fostering a groundbreaking initiative that will play out by way of an exclusive charity partnership with Clear Blue Sea as a means to tackle the mounting global plastics crisis. “We figured the liquor industry needs a hero,” said co-founder Jon Dunnington.

The incredible quality of Ripple Vodka provides not only a fantastic spirit to enjoy but also a welcomed break from the fast-paced world and a means to connect with friends, celebrate life, and make meaningful memories. And to top it all off, Ripple Vodka is proudly distilled in the U.S.

Get involved igg.me/at/ripplevodka or learn more about why Ripple Vodka is poised to become an environmental tour de force at www.ripple.vodka and joining the conversation on social media using #drinkforagoodcause #turnadropintoaripple

Founded in 2019 by British Expats Jon Dunnington and Anthony Packwood, Ripple Vodka is a new ultra-premium vodka that is reinventing how the world drinks. Each drop purchased goes towards cleaning the world’s oceans by removing harmful plastics, one drink at a time. Working towards creating new industry standards and ending damaging cycles, Ripple Vodka is dedicated to disrupting a $27 billion industry by making some of the best tasting vodka and leaving the world better than we found it.