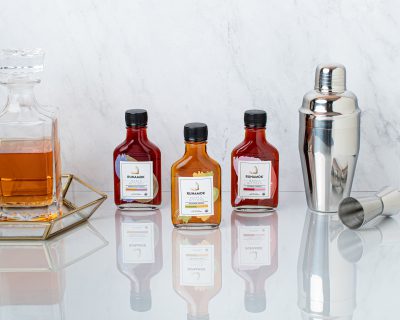 “At Runamok Maple, we have been creating cocktails using our infused and smoked maple syrups since we started production,” said Laura Sorkin, co-founder of Runamok Maple. “Through our experimentation over the years, we have come to realize that our maple-based creations are, to this day, some of our favorite cocktails. With the launch of our new cocktail syrups and bitters, we want our customers to experience those same flavors that we have been sharing with our family and friends.”

Most cocktails feature a touch of sugar, which most commonly comes in the form of simple syrup, but the process can be tedious, particularly for the home bartender, and the taste of the granulated sugar dissolved in water is sweet but plain. Runamok Maple’s new cocktail syrups feature the rich, robust, and nuanced flavors of organic Vermont maple syrup, along with additional flavor notes from high-quality ingredients such as ginger and orange. The cocktail syrups, which are priced at $16.95 per 250 mL bottle, also have the added bonus of already being in syrup form, eliminating the extra step of dissolving sugar.

Made with 100% pure Vermont maple syrup, the Maple Old Fashioned cocktail syrup is an infusion blend of real herbs and spices, without any refined sugar. The syrup features a slight bite from Runamok Maple’s very own bitters, along with the subtle essence of orange and cherry, making it the perfect all-encompassing mixer to add to your favorite bourbon or whiskey. Similarly, the Smoked Old Fashioned cocktail syrup is packed with all of the classic Old Fashioned flavors – only this time Runamok Maple uses its Smoked with Pecan Wood maple syrup to add a unique flavor dimension. Maple syrup and whiskey are the perfect pairing, with each offering complex flavor profiles that bring out the best in the other. The added element of smoke creates the perfect drink to enjoy near a fire on a crisp fall evening.

In addition to the Old Fashioned, Runamok Maple drew inspiration from two more classic cocktails, the Gin & Tonic and the Moscow Mule, for its other cocktail syrups. The Maple Tonic combines Runamok Maple’s signature organic maple syrup with the addition of quinine extract, lemon, and lime, giving the mixer a bright, refreshing taste that will have cocktail drinkers quickly forgetting about traditional tonic water. Mixing the Maple Tonic cocktail syrup with gin and seltzer water makes for an easy and delicious summer cocktail. Like the others, the Maple Ginger Mule cocktail syrup features 100% pure Vermont maple syrup as its base. Runamok Maple then infuses fresh ginger and lime into the cocktail syrup to give it a crisp, zesty flavor profile and a cleaner overall taste than mixers that use artificial flavors.

Launched alongside the cocktail syrups is Runamok Maple’s collection of cocktail bitters. Made in the traditional way with all-natural herbs and root extracts infused in alcohol, Runamok Maple delivers its version in a maple base. Despite being maple-based, the bitters pack a punch, like traditional bitters, and just a few drops can take a cocktail to the next level. Each 100 mL bottle of bitters is priced at $11.95.

With notes of cardamom and ginger, the Floral Maple bitters combine botanical complexity and subtle aromas with a smooth maple base. The addition of rose, citrus, and clove makes these bitters perfect for any gin or vodka cocktail. Built on a warm base of maple, cinnamon, clove, and allspice, the Aromatic Maple bitters meld perfectly with the flavors of darker spirits, like bourbon and whiskey, and even feature subtle tasting notes of sarsaparilla and vanilla bean. Lastly, the Orange Maple bitters are perfect for brightening up any cocktail – whether fruity or neat. The citrus aromas, layered on top of a subtle maple base, make it a wonderful addition to cocktails made with vodka, gin, and even bourbon.

Runamok Maple’s full collection of products – including specialty maple syrups like Bourbon Barrel-Aged, Cardamom-Infused, Cinnamon + Vanilla-Infused, and Pecan Wood-Smoked – are available on runamokmaple.com. The products can also be found on the brand’s Amazon page, as well as at specialty food shops across the country.

Runamok Maple, a Vermont-based company owned by husband and wife team Eric and Laura Sorkin, produces organic maple syrup from its sugarbush located on the slopes of Mount Mansfield. Since 2016, Runamok Maple has been showcasing the versatility of maple with its unique line of pure, barrel-aged, smoked, and infused maple syrups – and most recently its collection of maple cocktail syrups and cocktail bitters. With over 1,000 acres of land in northern Vermont, the team at Runamok Maple manages 100,000 taps to bring their pure maple syrup to consumers near and far. Boasting over a dozen varieties, including flavors like Bourbon Barrel-Aged, Smoked with Pecan Wood, and Cinnamon + Vanilla Infused, Runamok Maple is available for purchase on runamokmaple.com as well as in select specialty food shops across the U.S. and Amazon.com. For more information, please visit runamokmaple.com or check out Runamok Maple on Facebook, Twitter, and Instagram.