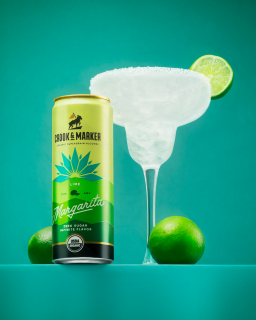 Crook & Marker, the first fully USDA Organic alcohol beverage brand, has announced the launch of its latest innovation – premium canned Lime Margaritas made with pure Blue Agave Tequilana and all-natural ingredients. Unlike standard margaritas that can serve up more than 300 calories and 30 grams of sugar per serving, Crook & Marker Lime Margaritas are an easy-drinking alternative boasting restaurant-quality flavor with just zero sugar, 1g carbs, and 100 calories.

As a brand known for pushing the limits of traditional alcohol beverages, Crook & Marker’s new Lime Margaritas fill a deep void in the canned cocktail category. For years, margarita fans have had to compromise on taste, convenience or ingredients – but no longer. The Lime Margaritas deliver perfectly balanced flavor in every can and are sweeneted from natural sources, gluten-free, non-GMO, vegan, and at 5% alcohol by volume (ABV), they pack a punch for those who enjoy a sip south of the border.  All Crook & Marker beverages are made with its proprietary BaseBrew® alcohol, which is crafted using ancient supergrains including quinoa, amaranth, millet and cassava root, and finished with vibrant all natural flavors.

To sweeten the deal and celebrate the new flavor dubbed Cinco de Margo, Crook & Marker is kicking off a national BOGO promotion from March 1 – May 31; during this period, consumers can try the new Lime Margaritas for free with the purchase of any Crook & Marker 8-pack.

Crook & Marker Lime Margaritas are available in 8-packs and sold nationwide, with prices varying by market.