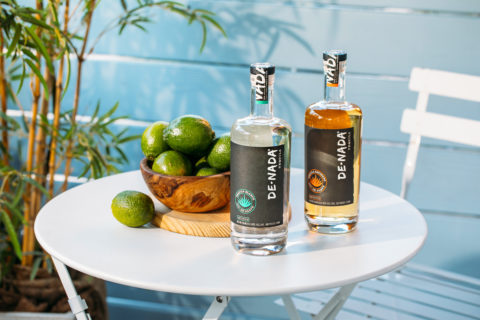 With its name meaning “You’re welcome” in Spanish, DE-NADA Tequila honors generations of Mexican tradition and sustainability. Its authentic production methods include the use of estate-grown agaves, brick-oven roasting and local natural yeast, while shunning techniques like diffusion, as well as additives, artificial flavors and colors. The 40% ABV spirits represent the highest possible quality at very accessible price points: Blanco (SRP $38.99/750ml) and Reposado (SRP $42.99/750ml).

DE-NADA Tequila has captured the imaginations, hearts and palates of some of New York City’s top bartenders and is poured at The Dead Rabbit by Jillian Vose, at Seaborne by Lucinda Sterling and at The Sentry Flatiron at Hotel Henri by Gates Otsuji. Other top bartender fans include Anthony Baker, formerly of The Aviary and now Cocktail Professor at Momentum Mixology, where he specializes in online home bartending education, and Brendan Bartley of Bathtub Gin. DE-NADA Tequila is available at fine spirits retailers in Manhattan, such as 67 Wine & Spirits, Wine Story Liquors  and Manley’s Wines & Spirits. In Brooklyn, it is carried by FIASCO! Wine and Spirits, a new bottle shop in Crown Heights, Brooklyn by Ivy Mix, Conor McKee and Piper Kristensen. DE-NADA is also available via Drizly. The Reposado expression was recently named the “Best Tequila” and earned Double Gold at the 2021 John Barleycorn Awards, which are judged by top spirits journalists.

“We are very excited to partner with Empire, which is one of the largest distributors in New York State,” says Neeson, President and Co-Creator, DE-NADA Tequila. “We are honored that DE-NADA is the only tequila in their Vintage Division, which specializes in fine wines and spirits, like Opus One and The Hess Collection. Many of their sales representatives boast sommelier credentials, and they have a deep understanding of the quality and value proposition that DE-NADA represents. We really feel that DE-NADA will get the attention it deserves, along with limitless scalability.”

“Empire has chosen to partner with DE-NADA because it offers tremendous value to the category,” says David Drucker, Executive Vice President of Sales, Empire Merchants. “Since launching, the brand has demonstrated great growth velocity, with impressive reorder rates. We are excited that its founders, Danny Neeson and Adam Millman, are very much hands-on and in the market. Their passion for DE-NADA is palpable. Moreover, the fact that it is made by one of Mexico’s most revered distilleries using traditional methods with no additives or short-cuts really resonates with today’s tequila drinker.”

“New Jersey is a key market for DE-NADA, so our partnership with Allied, the state’s largest distributor and 10th largest nationwide, is a game-changer,” says Millman, CEO and Co-Creator, DE-NADA Tequila. “Beyond their sheer size, including annual sales of more than $1 billion and a sales force of more than 100 representatives, we were impressed by their track record. They have collaborated with many emerging brands and transformed them into established powerhouses. With Allied’s help, we see massive growth potential as DE-NADA becomes more easily accessible for tequila lovers in the Garden State.”

“Allied gets approached by literally hundreds of new brands every year and with many high performing tequilas in our portfolio, we did not need another,” says Tom Fandel, Vice President, Supplier Relations & Innovation, Allied Beverage Group. “However, when meeting Danny and Adam, I was struck by their passion, confidence, and will to succeed. They are fearless. Moreover, when I tried DE-NADA, I was immediately impressed. The liquid delivers. It is very accessible from both a flavor and pricing standpoint. My job is to get it into accounts and their job is to get it out, which I’m confident Danny and Adam, who are adept marketers, will do. Their success will be our success.”

The first tequila brand created by Millennials, DE-NADA®? is the brainchild of tequila aficionados and entrepreneurs Daniel Neeson and Adam Millman. Their new range of premium, 100% Blue Weber agave tequilas, distilled by the acclaimed Feliciano Vivanco y Asociados distillery, honors generations of Mexican tradition, authentic production methods and sustainability. The Blanco and Reposado expressions, made with no additives or shortcut methods, like diffusion, are sold in New York and New Jersey, with Louisiana and California rollouts planned, as well as via Drizly. They offer the highest quality at accessible prices. The Reposado expression was named the “Best Tequila” and earned Double Gold at the 2021 John Barleycorn Awards, which are judged by top spirits journalists.