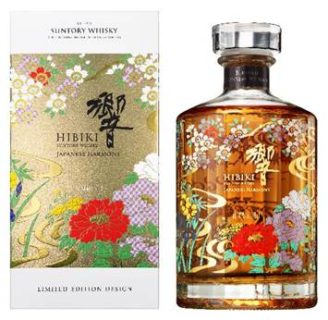 CHICAGO, Il – The House of Suntory, the founding House of Japanese Whisky, announced the release of a specially-designed, limited edition bottle of Hibiki Japanese Harmony. Adorned with painted flowers and flowing ribbons of water, this one-of-a-kind bottle was designed to represent the vital force of Japan’s everchanging twenty-four seasons. This limited-edition bottle will be available in select global markets including the United States this month.

From its introduction in 1989, the Hibiki bottle is presented with 24 facets. The design symbolizes the 24 hours of a day, as well as the 24 seasons of the year in the traditional Japanese lunar calendar. The 2021 limited edition pays tribute to the Ryusui-Hyakka (One-Hundred Flowers and Flowing Water). The design motif epitomizes the cyclical passage of time, showcasing the blossoms of the Japanese twenty-four seasons juxtaposed with the ever-changing flow of water that connects one passing season to another. The Hibiki bottle celebrates the much-loved blooms, colors and shapes of seasonal flowers that make the Japanese year so special. A deep appreciation for the seasons and a sensitivity for the passage of time accounts for the Japanese culture’s unique sense of harmony with nature. In tune with Suntory’s philosophy, the design bottle series is the next iteration of the brand’s continuous pursuit of harmony.

“The iconic Hibiki bottle has always been a representation of Japanese art and design, as represented by the many limited-edition series over the past ten years,” said Jon Potter, Managing Director of the House of Suntory. “This specially-designed bottle is not only the continuation of this artistic expression, it honors Hibiki and Suntory’s ethos to live in Harmony with nature. In 2021, this philosophy may echo with the world more than ever.”

The Hibiki brand was introduced to the world in 1989 and since then has been embraced as the paragon of Japanese Whisky. It is not only Japan’s most highly awarded blended whisky, but also among the most prestigious and honored whiskies in the world. Introduced in 2015, Hibiki Japanese Harmony is a harmonious blend blessed with the riches of Japanese nature and craftsmanship. Hibiki Japanese Harmony is a meticulous blend of the finest selection of malt and grain whiskies from the House of Suntory Whisky’s Yamazaki, Hakushu and Chita distilleries. This delicate blend creates a oneness unfolding a full orchestra of flavors and aromas.

Whether for an elevated gifting occasion or a personal indulgence, the 2021 Hibiki limited edition is an invitation to appreciate and enjoy Japanese harmony.  Hibiki Japanese Harmony 2021 Limited Edition is available for a suggested retail price of $125 USD for the 750ml bottle.

Since 1923, Suntory has been renowned as the pioneer of Japanese whisky for its House of Master Blenders and for their Art of Blending. The founding father of Japanese whisky Shinjiro Torii built Japan’s first malt whisky distillery in Yamazaki, and the Suntory legacy continued with Torii’s son, Keizo Saji, Suntory’s second master blender who continued to establish distilleries including the Hakushu distillery. As the generations of Suntory’s master blenders carry on, Suntory Whisky remains committed to heritage and innovation. The House of Suntory Whisky has been named four-time Distiller of the Year at the International Spirits Challenge in London, UK (2010, 2012, 2013, 2014).

Beam Suntory was created in 2014 by combining the world leader in bourbon and the pioneer in Japanese whisky to form a new company with a deep heritage, passion for quality, innovative spirit and vision of Growing for Good.  Headquartered in Chicago, Illinois, Beam Suntory is a subsidiary of Suntory Holdings Limited of Japan.  For more information on Beam Suntory, its brands, and its commitment to social responsibility, please visit beamsuntory.com and drinksmart.com.