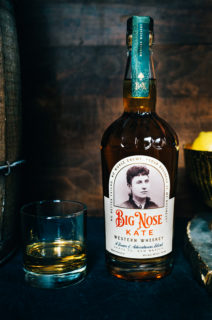 SANTA FE, N.M — Big Nose Kate is the stunning new western whiskey from Melissa Heim, one of the top rising stars in the spirits world. In naming the whiskey after Big Nose Kate— an icon, rule breaker, and enterpriser, but never fully appreciated as the huge force on the frontier that she was— Heim and her partners aim to celebrate all adventurers who deserve their due.

A highly unique blend with a strong body and rich mouthfeel, Big Nose Kate opens with notes of dry sherry and cherry fruit, cereal grain and oak, and finishes with mellow baking spice. Artfully and meticulously sourced from superb distillers across the country, the whiskey is well-traveled, bold, and brave. Just like its namesake. (And yes, it has a big nose.)

“We are excited to finally introduce a strong independent female protagonist into a brand world long associated with male figureheads,” says Heim. “But we are not aiming to be a ‘gendered’ whiskey. We’re for all people who like discovering great stories, and tipping a glass to those behind them.”

“Kate was an entrepreneur, change-maker and whiskey drinker to boot, so we believe she’s cheering us on from the saloon in the sky,” Heim added.

Big Nose Kate is produced in Santa Fe, New Mexico, where Kate operated a notorious “Dance Hall” (until she skipped town for her next adventure). A key contributor to the whiskey production is Caley Shoemaker of Santa Fe’s Altar Spirits, herself an industry luminary, and like Heim, one of only a handful of female Head Distillers in the United States. Also playing a key role in Big Nose Kate in various capacities are Kevin Burke, a highly experienced beverage industry leader; and Paul Earle, an entrepreneur and branding aficionado.

The extraordinary life of Maria Izabella Magdolna Horony, also known as Catherine Elder, and later feared and revered everywhere simply as the inimitable one-and-only Big Nose Kate, is a tale for the ages. A Hungarian aristocrat’s daughter turned immigrant and orphan, she was drawn to the wild American west through chance, rebellion, opportunity, and a deep curiosity in people, places and ideas. A strong, industrious, and fiercely independent self-made woman generations ahead of her time, Kate was Doc Holliday’s “partner in crime,” bucked horns with Wyatt Earp, and ran a number of gambling and entertainment operations. Let this be clear: there was no better friend, and no worse enemy than Big Nose Kate. Yet the Docs, the Wyatts, the cowboys, and the rangers always commanded center stage. Until now.

Mel is a Head Distiller & Blender who has already won 40 medals for flavor and quality in a wide range of spirits products that she has made. Mel is considered by many to be one of the first ever female Head Distillers and blenders west of the Mississippi, and also one of the youngest. A visionary maker, general manager, executive, and operator, Mel does it all at Big Nose Kate.