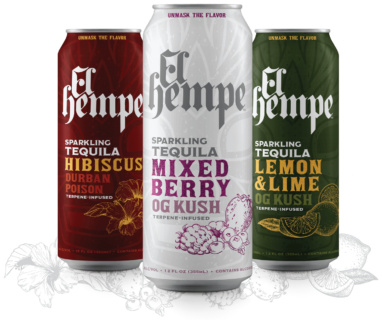 “We’re excited to announce distribution in two key states,” Bash said. “While there are other tequila seltzers on the market, El Hempe is the first to offer the essence of cannabis in a spirit without THC. We expect this to be very popular in the RTD market, especially among younger drinkers.”

The company’s plan is to engage with on- and off-premises accounts who are looking for a new and unique RTD cocktail and not another “me too” product.  With tequila consumption continuing its momentum, El Hempe is looking to capitalize on the growing “cannabis curious” consumer base.

El Hempe scientists were able to match the scents and flavors of two strains of cannabis – OG Kush and Durban Poison – using non-cannabis plant-based botanicals, which deliver all the flavor without psychoactive properties.

Orders can be placed through the Oregon Liquor & Cannabis Commission (in Oregon) oregon.gov/olcc/Pages/default.aspx; and MHW mhwltd.com/ in California.

The canned spirits are available in three flavors: Lemon-Lime OG Kush (5% abv), Mixed Berry OG Kush (5% abv) and Hibiscus Durban Poison (8% abv). Although the essence of cannabis is apparent immediately after a can is opened, the seltzers contain no THC or CBD.

El Hempe’s rollout begins in California and Oregon, where tequila and cannabis are particularly popular, and will gradually move into other states throughout 2022.