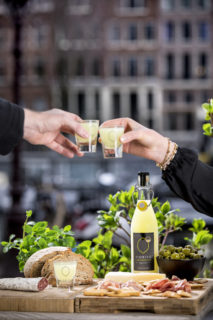 With summer just around the corner the high season for limoncello fans around the world is getting under way! The limoncello category has lately been skyrocketing and is still growing at rates of over 200% in markets like Australia, according to IWSR 2020 data. Fiorito Limoncello outperforms the category with 50% growth in mature markets like the Netherlands* and market shares of up to 35% in Finland. As one of the main innovation drivers, artisanal Fiorito limoncello attracts new consumers to the category by hitting major trends such as hand-crafted quality, 30% less sugar on average compared to its competitors and its very modern and minimalistic package design. Besides, Fiorito is the only limoncello that is entitled to carry the ‘Superiore’ hallmark in the Netherlands. With 23,000 nine-litre cases sold in 2020, Fiorito is one of the best-selling limoncellos in countries like the Netherlands and Finland. It was launched in 2011 and thanks to global cooperation with De Kuyper Royal Distillers, Fiorito is available in countries worldwide, including the USA, Germany, Spain, Israel, Belgium, Finland, Sweden and Australia.

“For years we have seen a limoncello momentum coming. By innovating and premiumising the category Fiorito has led and taken the trend further forward. Now the limoncello momentum is finally here! We are excited to see exceptional growth in markets where we just recently started like the US and Australia. That proves our expansion strategy to be right,” explains Franco Fiorito, Director of Fiorito Limoncello. To seize the moment the Dutch spirits company has expanded to more US states such as Texas, Florida and New York and will soon be available in the UK, where limoncello sales growth is running at 24%.

“The reason for the limoncello momentum is increased home consumption during the pandemic with consumers serving limoncello after a meal with friends and loved ones. Already last year we saw double-digit growth in on-trade when bars and restaurants reopened because people ordered what they loved to drink at home. We expect this trend to be even stronger this summer in various countries,” says Franco Fiorito.

A further reason for Fiorito’s ongoing success is the introduction of new ready-to-drink (RTD) products in line with the hard seltzer category such as the Fiorito Limoncello Tonic containing Fiorito Limoncello, tonic water, basil and natural lemon grass in a 250ml slimline can. Limoncello Tonic was developed with top bartenders for a perfect taste. It is a spot-on proposition given the current popularity of canned RTDs and attracts many new customers to the category. The Dutch spirit expert was the first liqueur producer to bring this popular drink as a premixed option to markets.

“Traditionally limoncello is served as a digestif after dinner. This consumption moment is growing, with the pandemic as an accelerator. In addition, we are seeing refreshing cocktails like Fiorito Spritz and Fiorito Tonic develop, extremely well lately. As Fiorito is a first-class product in its category and a premium mixer for great tasting, refreshing cocktails this trend fits very well in our growth strategy”, says Franco Fiorito. The summer cocktail Fiorito Spritz contains along with the limoncello prosecco or sparkling wine, garnished with mint leaves. Enjoyed best to cool down at the end of a hot summer day!

One of the most vital reasons for Fiorito’s continuing success is the premium hand-crafted quality that consumers increasingly demand. Following the traditional family recipe Fiorito Limoncello is made of hand-peeled zest of organic Sicilian lemons, giving this limoncello its mild and soft taste. This Limoncello Superiore meets the highest international quality standards and has been awarded several gold medals at prestigious competitions worldwide. To carry the Superiore hallmark, the limoncello must contain more than 300 grams of hand-peeled organic lemons per litre. Furthermore, the sugar level must not exceed 250 grams per litre and the percentage of alcohol should be between 30 and 32 per cent.

“Since our launch many limoncello brands have been put on the market, so we are very glad and proud that our limoncello is still one the best,” says Franco Fiorito.

Fiorito is a family-owned producer of artisanal quality spirits, founded in 2011 by the Dutch brothers Franco and Benno Fiorito. De Kuyper Royal Distillers is the global distributor for Fiorito Limoncello, the premium handmade limoncello made according to the old Fiorito family recipe with organic lemons from Sicily. Fiorito Limoncello has been awarded a silver medal at the prestigious IWSC several times, double gold (2018) and several gold medals at World Spirits Awards, gold medal at NY Spirits Competition (2018). Fiorito further offers a lemon-infused rum, a limoncello with a lower alcohol content (Li) as well as various ready to drink variations.